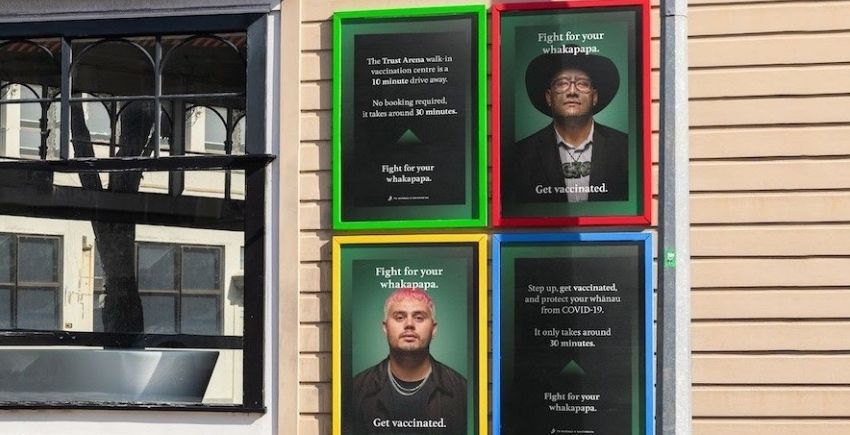 A slight uptick of cases on Monday, driven by new cases in the Pākehā and Māori communities, caution that new cases could increase again. 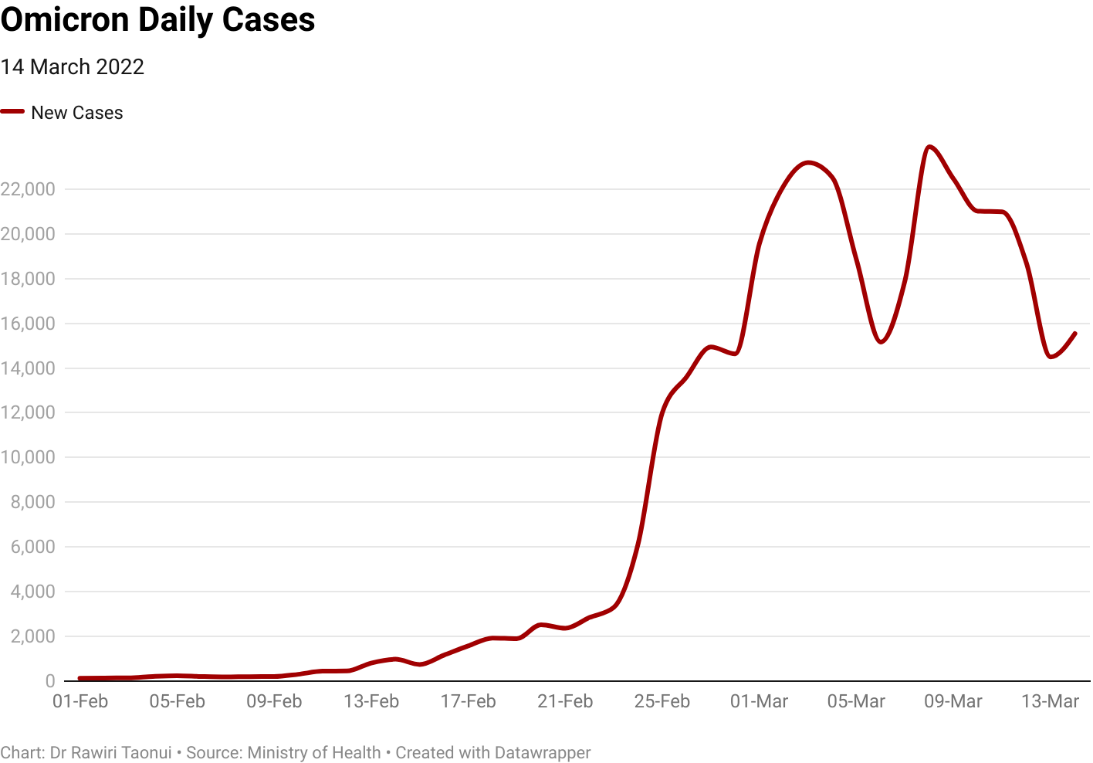 The Pākehā community has had the highest number of cases for the last 10 days. Pākehā cases were steadily declining from a high of 10,650 on 8 March before rising again yesterday.

Māori have had the second-highest new cases for the last nine days. Cases were steadily dropping since a high of 5,332 on 8 March before rising again yesterday.

Last week, Māori cases were closing the gap to Pākehā cases. Cases appear to have widened again although Māori cases continue to rise as a proportion of all cases in non-Auckland District Health Boards (see below).

We need to be careful about predicting a peak. With a slight uptick in new cases on Monday, Pākehā and Māori cases rose after a trough last week and may do so again. We are likely to see more Māori cases in the regions.

A steady and significant decline in Pacific Peoples and Asian cases, both of which have large communities in metro Auckland, suggest that these communities may have reached their peak there and in other parts of the upper North Island. 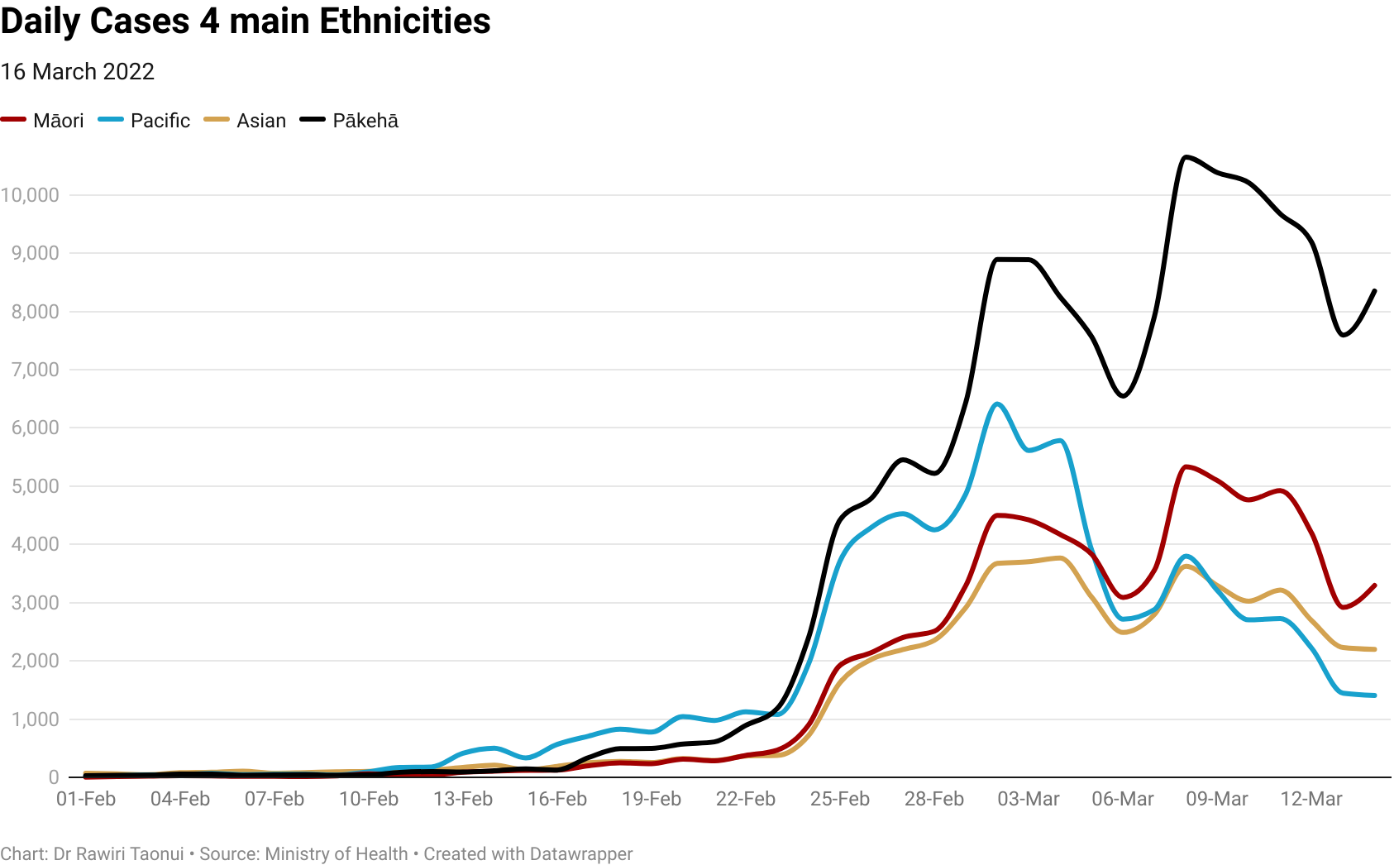 Corresponding decreases in Northland, the Waikato, the Bay of Plenty, and the Lakes on Monday suggest that other DHBs in the upper North Island are reaching a peak close behind Auckland.

The sidebar on the table below shows that all ethnicities have declining active cases. This reflects the greater decrease in cases in Auckland over-shadowing continuing rising cases in other parts of the country. 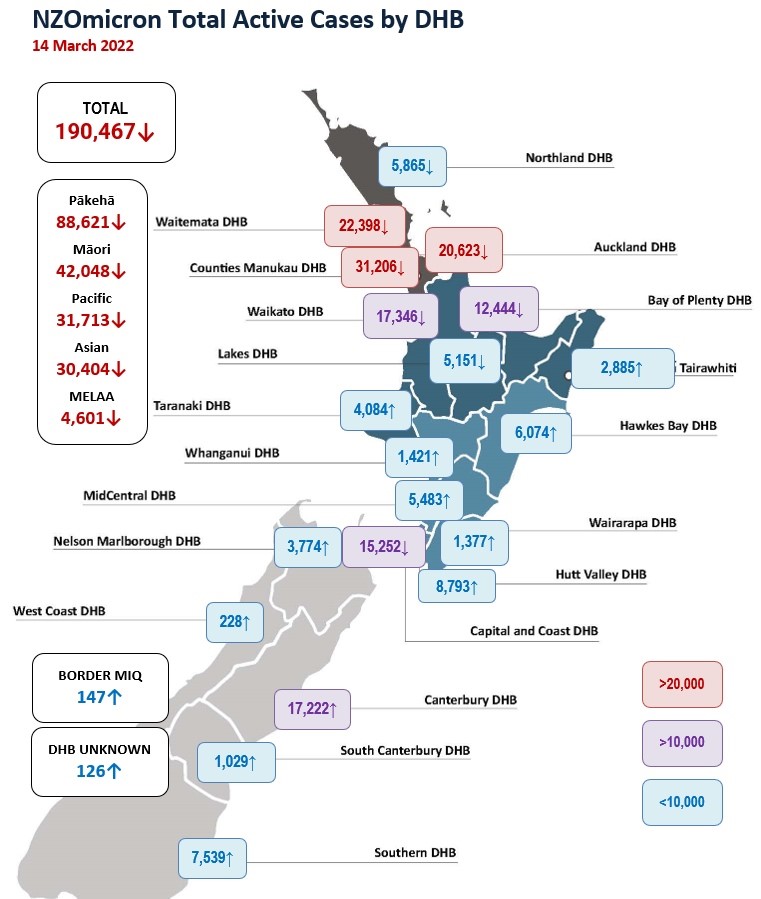 Active cases are declining in DHBs heading to an early peak (Waitematā, Auckland, Manukau, Waikato, Lakes), but more slowly for Māori whose percentage of totals are increasing in the Auckland and Manukau DHBs.

Māori cases are increasing more slowly than those for other ethnicities in the high Māori vaccinated MidCentral, Capital and Coast, Hutt, Nelson, Canterbury, West Coast, South Canterbury and Southern DHBs. 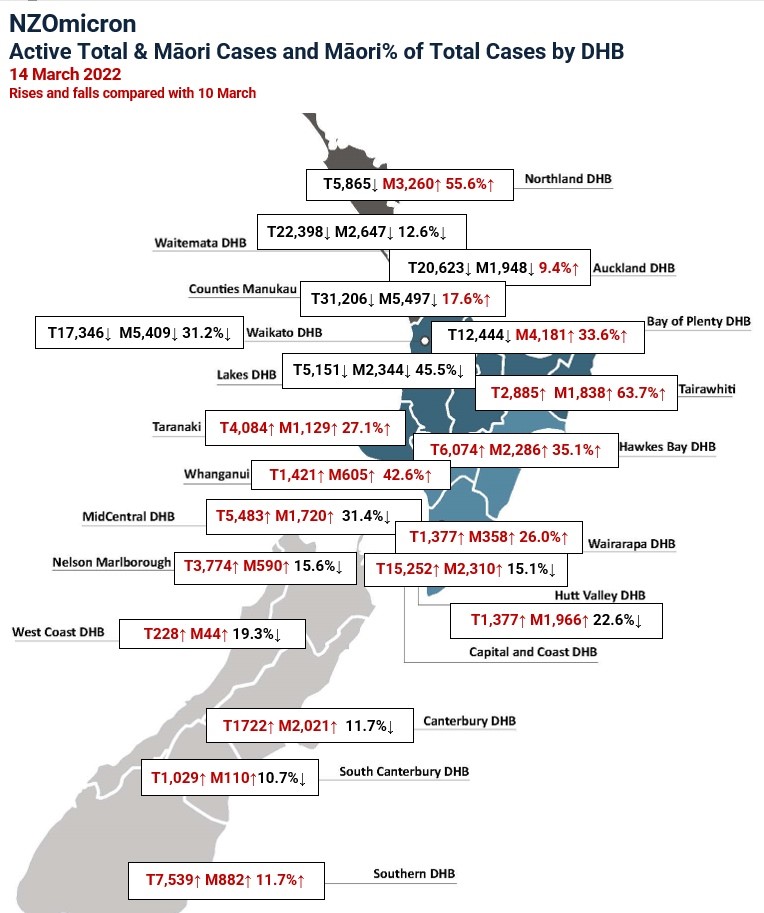 While total active cases are declining, Māori are an increasing percentage of active cases in the low Māori Vaccinated DHBs of Northland and the Bay of Plenty.

Total cases are increasing across the Central North Island with Māori cases increasing faster than other ethnicities in the lower Māori vaccinated DHBs of Te Tai Rāwhiti, Hawkes Bay, Wairārapa, Whanganui and Taranaki.

The table below shows the number of new Māori cases and hospitalisations since 1 February (an index this writer uses to differentiate between the overlapping Delta and Omicron OutBreaks).

Māori have contributed a significantly higher percentage of unvaccinated 12yrs+ (32.7%) and unvaccinated under-12yrs cases (24.6%) to national totals than our 17.1% demographic share of the population.

Comparing demographics, the 12yrs+ figure is the second only to the Pākehā community (42.6%) which comes from a much larger 71.7% population base.

By percentage and relative to demographic, Māori contribute the lowest percentage of boosted cases (11.5%) to the national total.

There have been 1,972 hospitalisations since 1 February of which 400 have been Māori.

In contrast, by percentage and relative to demographic, Māori contribute the second-lowest number of boosted hospitalisations (13.9%) after the highly vaccinated Asian community (4.7%).

While the Māori community has much lower vaccinations than the Asian community, our double and boosted vaxxed community are hyper-vigilant on protecting whānau and whakapapa.

There have been a total of 115 deaths since Covid-19 arrived in Aotearoa. 26 occurred during pre-Delta outbreaks, 29 during Delta, and 60 since 1 February which marks the beginning of the Omicron Outbreak.

Pākehā, particularly senior citizens, dominated deaths during earlier outbreaks. Māori dominated the Delta OutBreak. Many of the current Omicron deaths are again from seniors in the Pākehā community.

It is difficult to fully assess the ethnic data because the Ministry of Health is withholding the ethnic details of 13 cases (pending). This writer has ascribed them to the Omicron OutBreak until notifications suggest otherwise.

Auckland is nearing or passing through a peak, the rest of the upper North Island is within a week of a peak and other regions are following behind. The Asian and pacific Peoples communities may reach their peak before the Pākehā and Māori communities. Given the vulnerability of Māori in the regions, Māori may be the last ethnicity to peak. 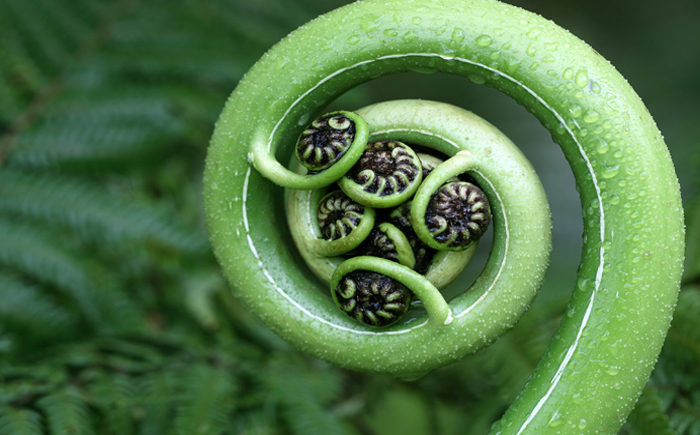 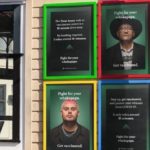