Source of the Delta OutBreak

On 17 August, the Ministry of Health confirmed a new community case as the Delta variant. The Ministry initially linked this case, a North Shore man (Case A), to a ‘Primary Index Case’ who was in the Crowne Plaza Managed Isolation Facility on 7 August, transferred to the Jet Park Quarantine Facility on 8 August and went to Middlemore Hospital on 16 August. The emerging evidence is that the Index Case may have infected a person who is now part of the Māngere Cluster (see below) on 10 August. If correct, this person is the new Case A.

The government took the correct course of action imposing an immediate Level 4 Lockdown. This gives Aotearoa the best chance of beating Delta. The seven-day gap between the likely community transmission date (10 August) and the first reported case (17 August) means the first group of cases were a brief period in the community, and the virus did not go through many cycles of transmission. Also good is that our world-class contact tracing system and record testing numbers have so far only found cases in Auckland and Wellington. Wastewater testing has not shown any results outside of those cities. 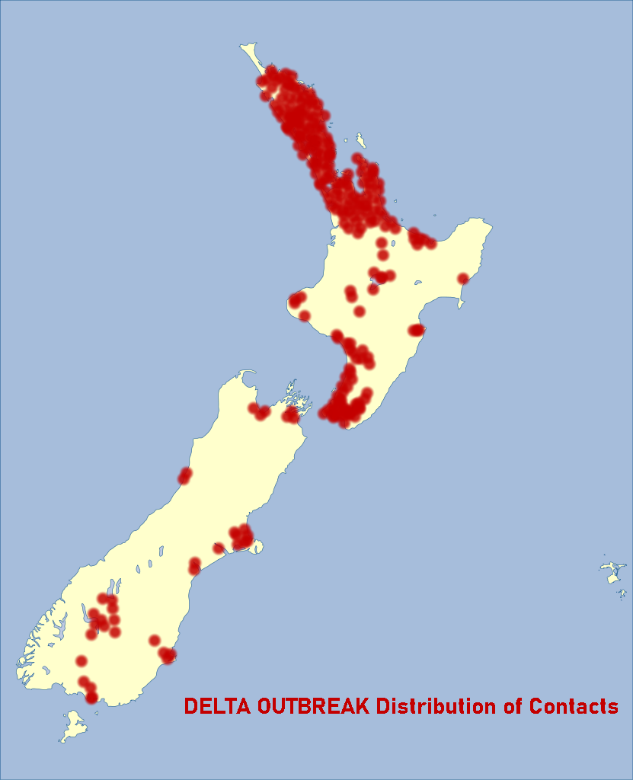 Nevertheless, there is a considerable number of high-risk events and locations of interest and a substantial number of contacts with several hundred dispersed around the country. The number of cases will continue to rise.

The New Zealand Delta OutBreak fits the international pattern medical experts describe as ‘younger, sicker and quicker’. In Aotearoa, 33% of cases are aged under 20 and 70% under 40. In earlier waves, younger people were less likely to get infected and if so, more likely to be asymptomatic. With Delta, younger people are a higher percentage of cases, the disease more severe, and hospitalisations more likely.

Younger people are also vulnerable because worldwide vaccination programmes have prioritised older demographics. When Delta struck the United States in June, more than 80% of Americans aged 65 and over had been fully vaccinated, but just under half of those aged 18 to 40.

The surge among young people may also be behavioural. They are more social, have wider social circles than older people and are more likely to have attended high-risk gatherings. There are calls to reduce the vaccination age to two years of age. 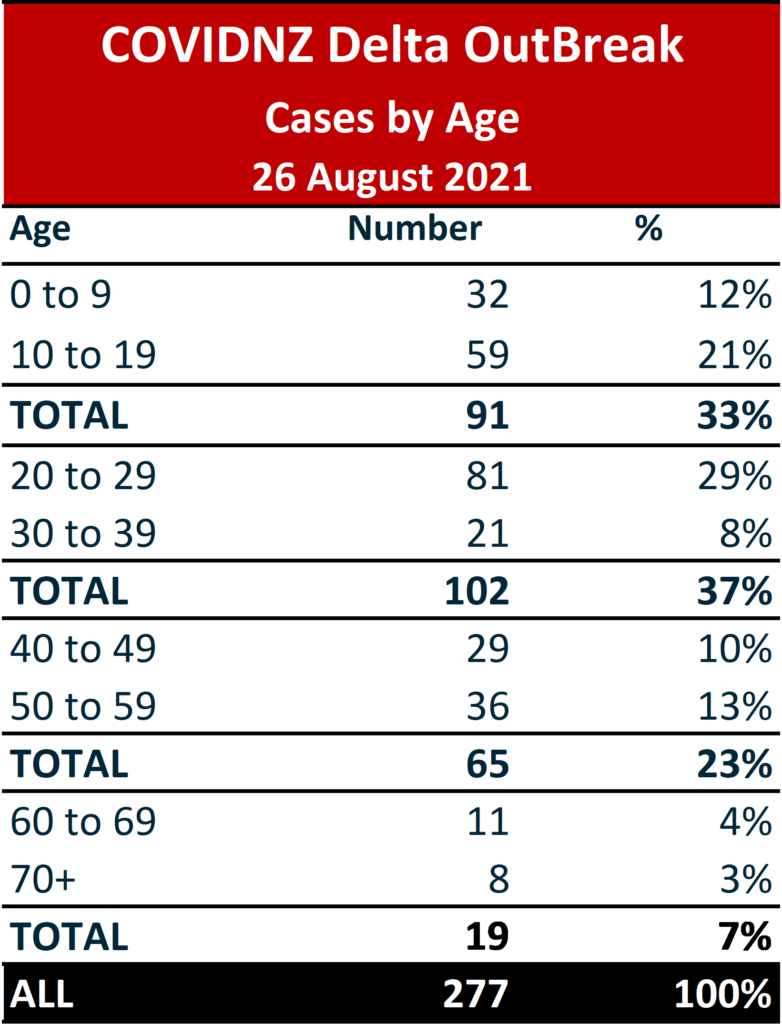 The next few days will be critical. The government expected the outbreak to peak this week at about 120 cases. Given the high number of locations of interest and contacts, a younger largely unvaccinated New Zealand demographic, and the under-vaccination of Māori and Pasifika that is overly optimistic.

The government is also comparing the numbers with last year’s first wave which peaked at 89 new cases. Last year’s Pacific-Māori Outbreak in Auckland is more comparable. Both began with a single identified infection. Both also emerge as having a similar distinct Pacific and Māori profiles. 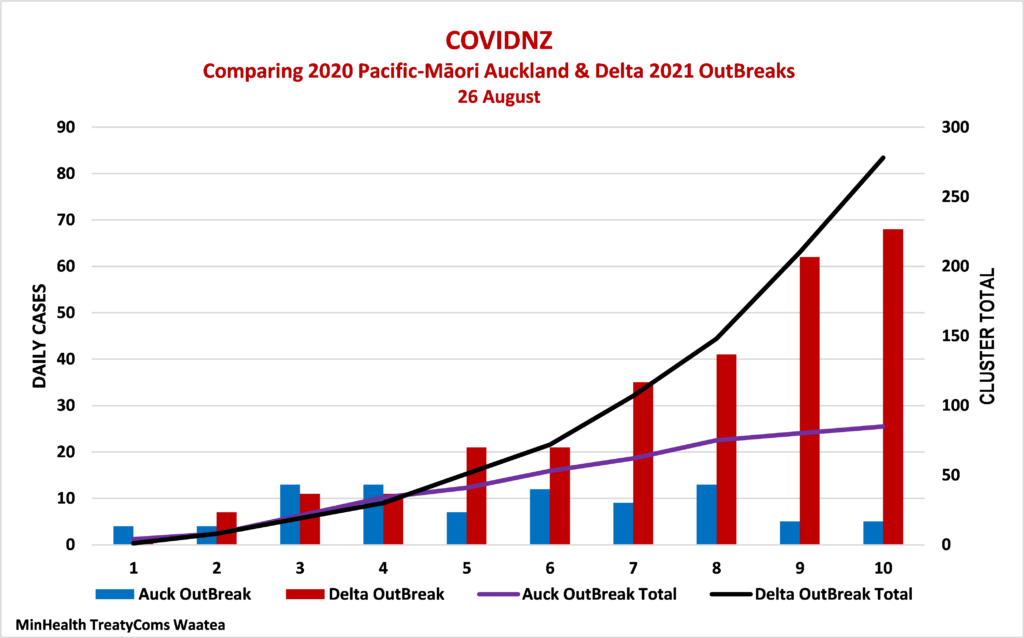 During the daily briefing on 24 August, the Director-General of Health, Dr Ashley Bloomfield said that the cluster is not ‘growing exponentially’. That is not the case. Between 23 and 25 August, the number of new cases jumped by 45%, 19% and 51%. After ten days, the Delta Cluster is already 3.3 times larger than the ten-day total for last year’s Pacific-Māori Auckland Cluster. The gap is increasing exponentially and the peak further away than the Ministry anticipates. Expect 500 to 600 cases by end of Monday next week.

There is a major risk of further breaches from MIQ into the community. When the source MIQ transmission occurred on 10 August the number of active cases in MIQ averaged 45 per day. Active cases in MIQ now number 314. If further MIQ breaches occur, there is a risk of a larger runaway event.

According to World Health Organisation data released this week, Pfizer gives between 30% to 65% protection after the first dose and 75% to 88% after the second dose. Full vaccination is therefore what counts. Just 11.5% of Māori (0.52 of the national figure of 21.1%) and 16.2% of Pacific Peoples (0.77 of the national figure) are fully vaccinated.

The Risk to Māori and Pacific Peoples

There are six Māori cases and 194 Pacific cases. With lower vaccination rates, larger youth populations, and lower socio-economic and at-risk comorbidity health profiles, Māori and Pacific are at particular risk Pacific case numbers are already high. Māori currently have the lowest numbers. Expect Māori numbers to rise when (not if) Delta gets into our communities. 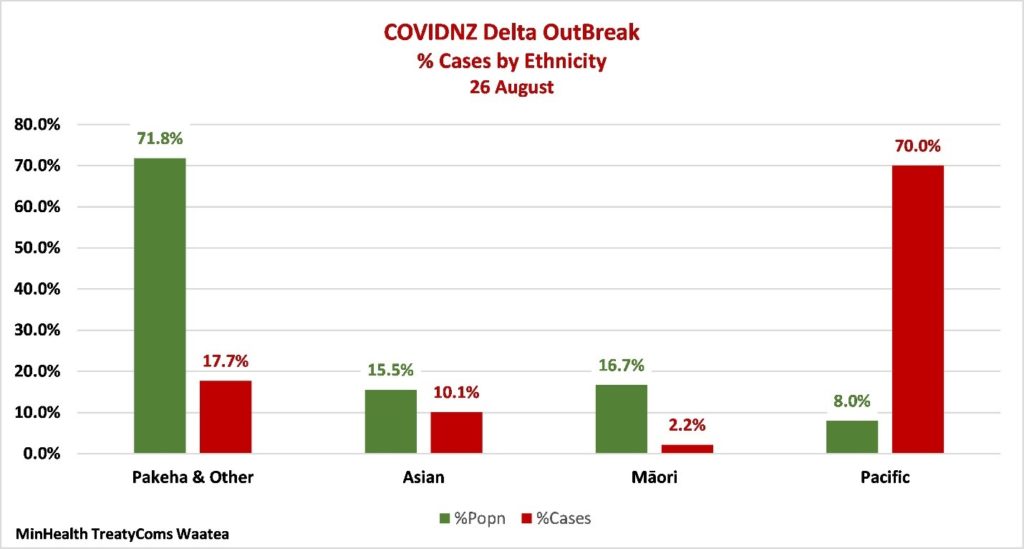 The government has said that it expects the vaccination gap between Māori and other New Zealanders to narrow as vaccination opens to younger ages. The opposite has been the case. During the early rollout, the Māori rate of full vaccination relative to all New Zealand others was 0.60. Over the last three weeks, the gap has widened to between 0.52 to 0.55.

A combination of factors accounts for the lower rate of vaccination for Māori. Our populations are susceptible to misinformation and conspiracy mountebanks exploiting the fears of the alienated and dispossessed. In March, the government announced a communications fund to promote the vaccination programme and combat misinformation. This writer has interviewed providers reporting that those funds are yet to arrive.

More significantly, the one size fits all reducing age vaccination regime, albeit including a kaumātua priority, has not worked because it fails to engage with the social, geographic, and demographic structure of our communities.

New Zealand is the 100th fully vaccinated country in the world. That is lower than developing countries like Tonga, Fiji, Peru, Sri Lanka, Cuba, and El Salvador. If we include Māori in the world figures we rank as the 122nd well below Samoa, Belize, Nepal, the Philippines, Indonesia, and Mexico. In this respect, the government has run a third world vaccination programme for a first world indigenous people.

The Vaccination of other Indigenous Peoples

Since June, several Māori health providers have set aside the Ministry age band approach and congregated communities vaccinating everyone together over the age minimum. That approach has achieved community outcomes as high as 60% to 70% fully vaccinated.

Overseas examples validate that approach. The rollout in Canada prioritised remote indigenous communities (the equivalent of Northland and the East Coast in Aotearoa) alongside frontline border and health workers as priority one groups.

British Columbia applied a differential age regime based on vulnerability, for example, vaccinating over 80-year-olds and over 65-year-old indigenous citizens at the same time, then over 65-year-olds and over 50-year-old indigenous citizens together. On August 10, Canada Indigenous Services reported that over 86% of individuals aged 12 and older in First Nations, Inuit and territorial communities had received at least one dose of a vaccine. Over 65% had received their second dose.

The United States distributed vaccines directly to Indian Health Service Providers and allowed them to decide the indigenous vaccination priorities. In the main, they congregated communities together and vaccinated everyone together over the age of 18 together(now 12). On 12 August, the Centers for Disease Control and Prevention released data showing that Indigenous Native Americans had a fully vaccinated rate 24% higher than whites, 31% higher than Latinos, 64% higher than African Americans and 11% higher than Asian Americans. The Navajo Nation, the largest indigenous community in the country, reports that more than 70% of its members aged 12 and over who live on the reservation are fully vaccinated, well above the rate of 59% for the whole country. 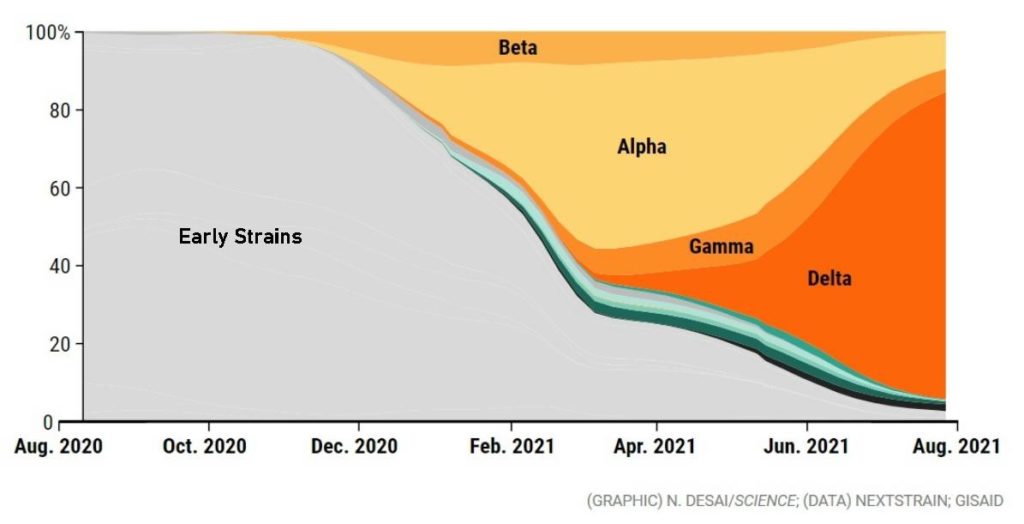 Delta is 60% more transmissible than Alpha, and 2.5 times more infectious than the 1st Generation strains. The variant has more mutations in the upper spike that clasps to human receptor cells than Alpha, Beta and Gamma. Experts believe one of these, a spike protein mutation P681R at the furin cleavage site (shown in white) is key to the enhanced fitness of Delta’s dominance over the Alpha variant.

Delta replicates much faster, meaning a shorter incubation period. Detectable in four days compared to the six days for other strains, infected people can spread the virus earlier and remain infectious for longer. On average one person with Delta can infect five others. Other researchers believe each Delta patient can infect up to eight other people. 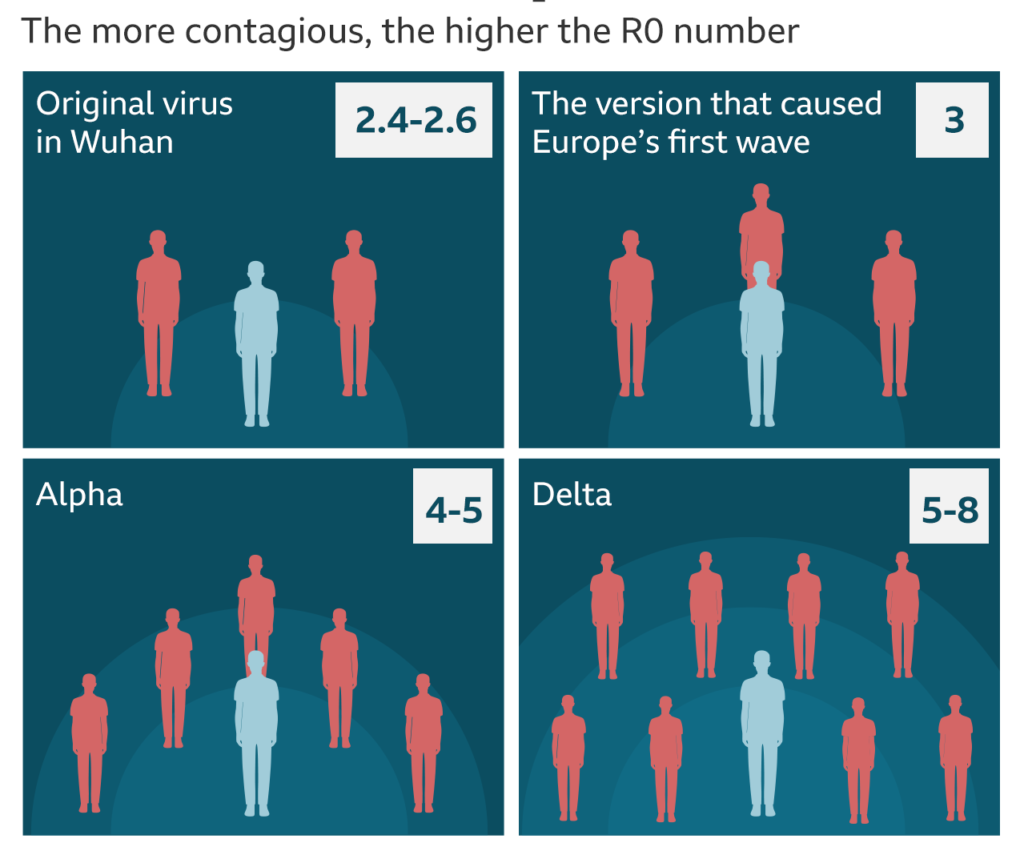 A Disease of the Unvaccinated

Scientists describe Delta as ‘the disease of the unvaccinated’ because its hyper-infectivity is exploiting poorer countries with low vaccination up cases and those who remain unvaccinated in richer countries. The unvaccinated and those with compromised immune systems comprise the highest percentage of Delta cases.

No vaccine is 100% foolproof. Scientists designed Pfizer to fight earlier strains of Covid-19, not Delta. Pfizer is 30% to 65% effective against infection by Delta after one dose and 85% to 88% effective in preventing infection after 2 doses. It takes two weeks to achieve this level of protection.

Recent research also suggests we will need a 3rd booster shot to combat Delta. Israel was one of the first countries to surpass 80% fully vaccinated. Case numbers, hospitalisations and deaths fell dramatically. However, during June and July when Delta arrived there was a dramatic increase in new cases. During four days in mid-July, there were 514 hospitalisations of which 69% were fully vaccinated persons and 89% of those were over 60 years of age.

Subsequent research found that after full vaccination the protection from Pfizer gradually wanes over the following six months particularly in older and/or immunocompromised persons. Israel is now beginning a third booster programme. The United States has announced that they will follow this beginning September.

If Delta spreads into the low vaccinated Māori community, there is a risk of a repeat of the 1918 Spanish Flu and other epidemic/pandemic events, not by scale but certainly by proportion in the number of cases, hospitalisations and deaths.

The important message is to wear masks, maintain social distance. Get vaccinated to protect your whānau and whakapapa. 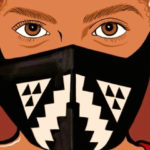