The Northland woman who tested positive for the B1351 South African variant arrived from London on 30 December. She returned negative tests at the Pullman Hotel on 2 January (Day 3) and 10 January (Day 10) and completed a health assessment and left MIQ (Managed Isolation and Quarantine) on 13 January. She developed symptoms on 15 January and was tested and self-isolated on 22 January. There is no explanation of why the second test was not conducted on day 12. This could have prevented the event now unfolding.

The genome of the Northland case is identical to another guest at the Pullman hotel who arrived on 9 Jan. The infection occurred between 9-13 January. An investigation continues to determine whether the infection was person-to-person, surface transmission, or airborne transmission, including possibly by microdroplets via the ventilation system.

An instance of the ventilation transmission was suspected in a Brisbane isolation hotel in Australia after six physically separated guests tested positive for the UK B117 strain. This led to a full relocation of 129 people. Though unproven, the hypothesis is feasible given B1351 and B117 produce higher viral loads including more exhaled microdroplets.

Close contacts for the Northland case have tested negative. Health officials are working to test all other at-risk groups. Including staff and current guests at the Pullman isolation facility, and those who have visited any of the 30 places associated with the Northland case, the number requiring investigation is between 1200 to 1300 people.

As of last night, two people from Auckland who were at the Pullman hotel between 9-13 January cases have tested positive. More contact tracing will be required. If there is further community transmission from any of the three Pullman cases, New Zealand is heading toward a Level 4 event.

The Risk for Māori

The new variants present a significant risk to Māori. As of 21 January, there were 36 arrivals in New Zealand with strains of concern, 29 with the UK B117 variant and seven of the South African B1351 strain. The government has not updated those numbers. With the three Pullman cases, at minimum, there are 10 with the South African variant.

The South African strain B1351 is thought to be 50% more infectious than earlier varieties of Covid-19. Of equal concern, the latest research suggests that B1351 can evade human antibodies. Vaccines may also not have the same efficacy on B1351 as on the earlier strains they were designed to combat. Companies are currently researching how to augment their vaccines.

The British strain B117 is 30% to 70% more infectious than previous strains. Even at 30% more infectivity, there will be many more cases, hospitalisations, and deaths. The most recent research suggests that fatalities for B117 could be 35% higher than for earlier strains and across all age groups. More research is required to confirm this.

Transmissibility and lethality are different. For example:

B117 is hyper-transmissible. It might also be more lethal. Both strains will have a significant impact on the immunocompromised. When coupled with the widespread evidence that earlier strains of Covid-19 had a disproportionate impact on marginalised ethnic populations and those living in impoverished conditions, B117 and B1351 pose a significant threat to Māori communities, particularly those over 50 years of age because Māori acquire immunosuppressive comorbidities 10 to 15 years earlier than Pākehā.

The Northland case is the 11th breach into the community since New Zealand defeated the first wave in June last year.

The government has an unstated goal of repatriating New Zealanders to the safety of home often from exceedingly difficult circumstances. New Zealand also allows sporting teams and foreign workers entry. It recently facilitated a quarantine bubble with Rarotonga and approved 1000 foreign students to enter in April. More than 100,000 travellers have passed through MIQ. On average, between 2600 and 3200 entries have arrived in New Zealand each week since the middle of last year.

These numbers are no longer sustainable. Our MIQ system evolved between June and October last year. Since then, a massive 60 million cases have been added to the world total in three months. With the emergence of new hyper-infectious strains becoming dominant, huge pressure is being placed on border protocols across the globe.

The government and the Ministry of Health are living in an October world that no longer exists. It has introduced required pre-departure negative tests from passengers embarking from the United States and Britain (extended 26 January to all countries except Australia and some Pacific Island nations). This is largely cosmetic. Since introduction on 16 January, more than 70 passengers have arrived from the United States and Britain without undertaking a test and 17 have tested positive for Covid-19 after arrival.

MIQ is currently managing 60 to 75 active cases at any one time. Over 5,400 entries have been approved to enter New Zealand over the next fortnight. New Zealand citizens have a human right to return home. A limit will not impinge upon that right. We do not need to close the borders completely, but we should reduce entries to a level where the number of active cases is more manageable. Australia uses a cap system. When case numbers are high, entries are lowered; when case numbers are low, entries are increased. With a similar population to New Zealand, Queensland provides the best comparison. Queensland alternates between caps of 500 and 1000 entries. Queensland has 12 active cases and has had 900 fewer cases overall.

PCR swabbing is the standard test for Covid-19 in New Zealand. PCR results can take 12 hours to process. Previously the Ministry of Health has resisted using other tests such as LAMP, which takes two hours to process, and Antigen testing which can be processed in 20 minutes.

Lamp and antigen testing have a wider scope for error. However, they are useful in certain circumstances. Heathrow Airport conducts LAMP testing for passengers departing to other countries. Australia provides pre-departure Antigen testing to meet their required negative test regime and has deployed them with beneficial effect to protect remote Indigenous Australian communities.

In a major contradiction, the government accepts proof of a LAMP or antigen test for our pre-departure negative test requirement but has not acted on a recommendation from the National Iwi Pandemic Response Group to deploy these tests when arrivals land at our airports. This approach would intercept positive cases and transfer them directly to quarantine, a protocol that could have avoided the Northland case.

The Absence of Vaccines

In addition to concerns outlined, the government has been late in purchasing vaccines. Other countries have advanced their vaccination programmes to counter the threat of the new strains. Australia advanced theirs from April to February to inoculate 6 million or 25% of their population by 1 March.

Our vaccines will not arrive until late March. Over the next two months, New Zealand will face the highest risk from Covid-19 since the beginning of the first wave.

Two weeks ago, the National Iwi Pandemic Response Group urged the government to act to reduce the number of entries into New Zealand, warning that if they did not so there would be breaches into the community. The government ignored that message, the Northland case event is the result. If the government does not act, there will be more breaches and a wider outbreak. 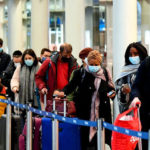