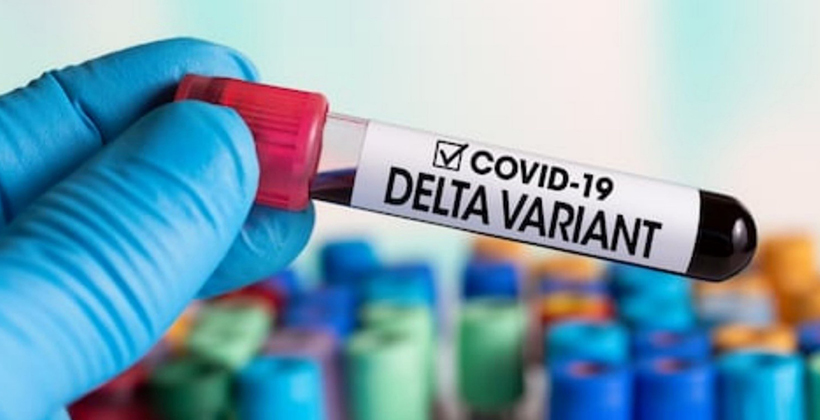 Delta in a World Context

During June and July, the government ignored the warning signs of a potential Delta OutBreak in Aotearoa, one of the key issues being that we were restricting entries from ‘Very High-Risk Countries’ but not ‘Very High-Risk Regions’.

In a radio interview and conference paper on 11 and 13 August, I made the case that a Delta OutBreak in Aotearoa was inevitable. Scientists first detected the Delta (B1617.2) variant in October 2020. Between October and 1 June, 2021 Delta had spread to 62 countries. Over the ten weeks to 10 August, Delta rampaged through another 80 countries surpassing the Beta (N1351) and Gamma (P1) strains in geographic spread. 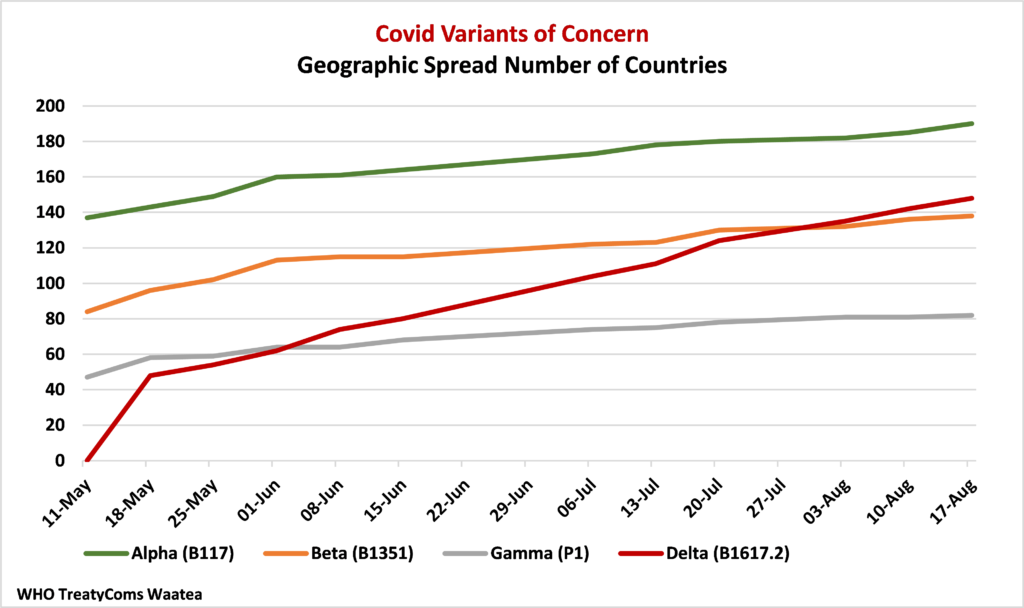 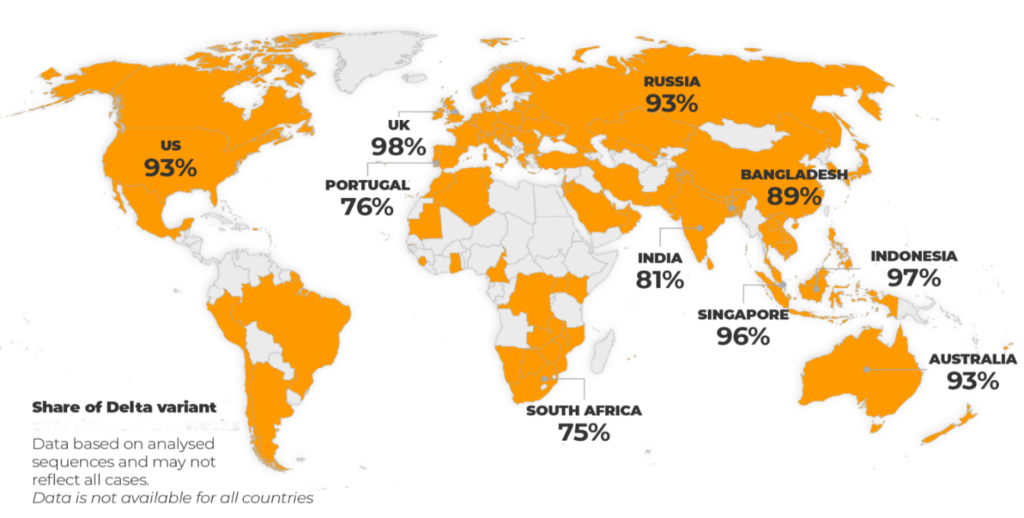 By mid-July, the government failed to comprehend the implication of Delta dominating Covid-19 infection rates across the globe with the variant driving a large new 5th worldwide wave of Covid-19 five times higher than the first wave that Aotearoa defeated in June last year. 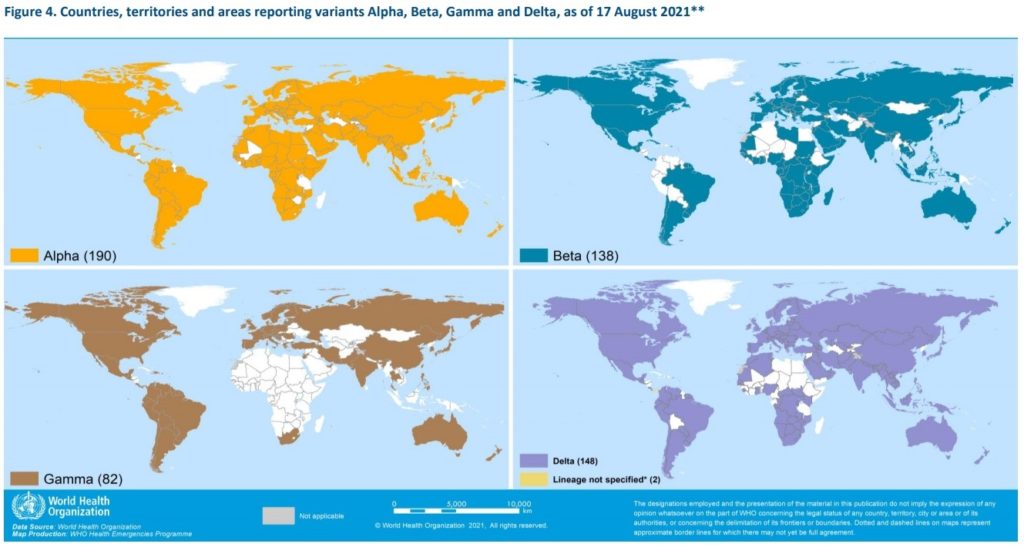 Last week, there were 4.4 million mainly Delta new cases and 66,000 deaths across the world. Also last week, Delta had reached 148 countries. Delta will surpass Alpha (B117) as the most widespread Variant of Concern over the next month.

Delta in the New Zealand Context

The international spread of Delta had repercussions for Aotearoa. During 2020, this writer argued that the safety line for managing active cases in Managed Isolation and Quarantine (MIQ) was an average of 20 per day. The safety bar assumes that each MIQ active case has on average at least 10 points of contact with transport, security, reception, testing and catering staff and other clients in MIQ. Twenty cases represent say 200 potential points of transmission. The more active cases in MIQ the greater the opportunity for community transfer. Last year, there were 10 breaches from MIQ and the border into the community. All but one occurred when active cases in MIQ were above 20 per day.

The Ministry of Health and government substantially reinforced MIQ and border protocols during the second half of last year. This raised the safety bar to 30 active cases per day in MIQ. The six breaches into the community this year all occurred when active cases were above this threshold. For example, during the Alpha, Beta and Gamma driven 3rd Wave between October and January, active cases in MIQ peaked at an average of 80 per day precipitating the Pullman and Papatoetoe clusters.

During the 4th Wave between February and April, the average number of active cases in MIQ peaked at 100 per day. The government narrowly avoided another outbreak in April by restricting travel from Very High-Risk Countries (now Brazil, Fiji, India, Pakistan, Indonesia, and West Papua). Active cases in MIQ declined to an average of 20 to 30 active cases per day comfortably below the safety line.

During June and July, the Very High-Risk Country protocol prevented entries from individual very high-risk countries but not very high-risk regions with large Delta outbreaks like Europe and the Americas. Consequently, the worldwide rise of Delta through June and July saw an increase in the number of Delta cases entering New Zealand by air and sea. One of these cases is the source of the current outbreak.

Active cases in MIQ rose from a manageable 20 to 30 to a riskier 40 to 60 average per day. The proportion of Delta positives cases steadily rose. From 2% of all cases in Aotearoa at the end of January, Delta made up 99% of all cases genomically sequenced in New Zealand by the beginning of August. Given Delta is more infectious, managing 60 cases is like managing 150 cases of the earlier strains. At this point, a Delta outbreak was inevitable.

Events between July and the first week of August portended an outbreak, for example, the arrival of Delta cases on the Victory Bay, Playa Zahara, Mattina and Rio de la Plata and in the Jet Park Quarantine Facility Delta infecting three people after opening doors to rooms at the same time on opposite sides of a corridor for just 3 to 5 seconds on four occasions.

On 17 August, the government announced a new case in the community. The Ministry of Health confirmed the case as Delta positive. As of 25 August, there are 210 cases. 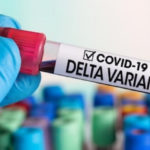