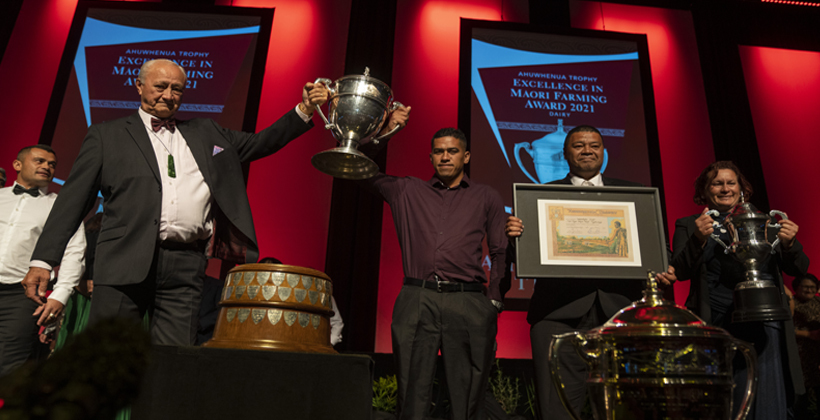 The winner of this year’s Ahuwhenua Trophy for the top Māori Dairy farm is Tataiwhetu Trust located in the Ruatoki Valley south of Whakatane.

The Minister of Agriculture, Hon Damien O’Connor announced their success at the Ahuwhenua Trophy awards dinner in New Plymouth attended by 800 people including the Hon Willie Jackson, Hon Meka Whaitiri, Kiingi Tuheitia, other dignitaries, politicians, agribusiness leaders and whānau from all the finalists.

As the Minister presented the winners with the trophy there were scenes of great jubilation as Trust members and whānau came on stage to join in the celebrations.

Tataiwhetu Trust is an organic dairy farm on which run 432 kiwi cross cows and carry 188 replacement stock on their two support blocks. They milk once a day and their herd produces 129,140 kgMS.

The other finalists were:

Pouarua Farms, a large operation consisting of 4,600 cows run on nine separate farms located near the township of Ngatea on the Hauraki Plains, close to Thames. The 2,200ha platform is the largest single dairy platform in the Hauraki region producing approximately 1.65M kgMS.

Tunapahore B2A Incorporation, a 385 cow operation located at Hawai and Torere on State Highway 35 on the East Coast of the North Island. The milking platform is 132ha, with 385 cows producing 125,940 kgMS.

Kingi Smiler, Chairman of the Ahuwhenua Trophy Management Committee, says the standard of all the finalists this year was particularly high and the judges had their work cut out to come up with a winner. He says the field days run by all the finalists were extremely good and showed the quality and depth of Māori dairy farming enterprises. Each finalist excelled and all are great role models for farmers.

“But in the end Tataiwhetu Trust were determined the winners and they and their staff are to be congratulated for this. Their farm is very special and is yet another example of our people working innovatively and hard and focusing on key strategic objectives. They join an illustrious alumni of past winners” says Kingi.

The Ahuwhenua Trophy is the most prestigious award for excellence in Māori farming and was inaugurated 88 years ago by the great Māori leader, Sir Apirana Ngata and the Governor General at the time, Lord Bledisloe. The objective was and still is to encourage Māori farmers to improve their land and their overall farming position with an emphasis on sustainability. On a three year rotational basis, the Trophy is competed for by Māori in the sheep and beef, horticulture, and dairy sectors. This year the competition is for dairy.

More details are at www.ahuwhenuatrophy.maori.nz.

In 1921 Sir Apirana Ngata held a Land Consolidation meeting on Tauarau Marae for over one month, with the view of sub-dividing the land into productive units to sustain the living requirements of Tūhoe families. Nine years later Lord Bledisloe, the then Governor General of New Zealand, visited Ruatoki to monitor the progress of this Consolidation Scheme.

In the mid-1950s it was recognised that the land blocks owned by the families were too small, plus locals were starting off with cull cows from European farmers and couldn’t meet production expectations. Tūhoe families walked off the land to seek more constructive employment and income from the Tasman Mill in Kawerau.

Between 1960 and 1980 the land was left desolate and our ancestors and parents strived to find the answer to fully utilise the land again. Finally in 1986 six Ngatirongo families agreed to combine their lands to form the Ngatirongo Trust Farm.

Between 1986 and 2009 the initial development of the Ngatirongo Trust Farm was led by our kaumātua Frank Vercoe, with the assistance of a Farm Advisor and Sharemilker. The Sharemilker was milking up to 600 cows twice a day, supplying Fonterra 12 months of the year.

When our kaumātua resigned as Trust Chair in 2009, Paki Nikora was appointed into that position by the beneficiaries. He says after scrutinising the financial accounts over successive years, it was apparent that under the Sharemilker arrangement it wasn’t returning revenue expectations, plus the increase to 3.2 stock units per hectare wasn’t beneficial for our lands and environment, so they decided to become stand-alone operation.

The Trust then purchased 400 in calf kiwi cross heifers, milking once a day, and transitioned back to seasonal milking. The husband and wife staff employed by the previous Sharemilker were then employed by us to be our Farm Managers, and they excelled through Primary ITO Levels 1, 2, 3 & 4 through the next ten years of development.

Because our name was Ngatirongo Trust Farm, there was a perception that all of Ngatirongo hapū were beneficiaries in our lands, but they were not. So in 2014 the name was changed to Tataiwhetu Trust, which means that the original six families are the only descendants of our ancestral lands. In the same year, the Trust was presented with the Fonterra Gold Grade Free Certificate in recognition of excellence for consistent supply of the highest quality milk.

In 2015 the Tataiwhetu Trust transitioned from convention milking to organic and is now fully certified by AsureQuality. In 2019 it received the Fonterra Organic certificate.

History of the Ahuwhenua Trophy

It is now 88 years since the Ahuwhenua Trophy was inaugurated by the visionary Māori leader Sir Apirana Ngata and the Governor General at the time Lord Bledisloe. What is quite remarkable is that this competition remains as relevant and as prestigious now as it was almost a century ago.

While the values and vision of Sir Apirana and Lord Bledisloe have remained unchanged, the way the competition is run has moved with the times â€“ especially since its re-launch of the competition in 2003.

The Ahuwhenua Trophy competition was introduced to encourage skill and proficiency in Māori farming. Sir Apirana Ngata realised the importance of retaining and improving what remained of Māori land was critical. He led the renaissance of Māori land development which had been decimated during the colonisation of New Zealand by forced sales and lack of opportunity and access to development capital.

The inaugural 1933 competition was open to individual dairy farmers in the Waiariki Land district and was won by William Swinton from Raukokore, Bay of Plenty. The following year the competition was extended to include entrants from North and South Auckland, Gisborne, Whanganui, and Wellington.

In 1936 the cup was won by Henry Dewes, a sheep farmer from Tikitiki. The Trophy was displayed in the Waiapu Farmers store which two weeks later caught fire and destroyed the cup. It was replaced with a new cup in 1938 but six years later that trophy was lost during a rail trip from Rotorua to Wellington. It was eventually found in 1946 in a Frankton store after being mislaid with someone’s personal belongings at the railway station.

The inappropriateness of comparing dairy with sheep and beef farms became increasingly evident and in 1954 the competition was divided into two separate awards, each with their own trophy. Once again, Lord Bledisloe, a man with farming interests donated the companion cup.

The competition continued up until the 1980s but interest started to wane and the last of the original competitions was held in 1990. It was Gina Rudland and Wayne Walden who along with Meat New Zealand chairman John Acland re-launched the awards in 2003. The awards took into account the changing face of Māori farming and the increasing importance of Māori Incorporations and Trusts in the agribusiness sector.

In 2005, the Ahuwhenua Management Committee decided on a new structure for the competition with sheep and beef and dairy competitions being run in alternate years. In recognition of Māori involvement in the horticultural sector, it was decided that in 2020, the competition would be opened up to also include horticulture. A new trophy was designed and made and there was excellent support for this initiative.

The first bi-annual dairy competition held in 2006 was won by the Parininihi ki Waitotara (PKW) Incorporation’s Farm 12 in Taranaki under the chairmanship of Spencer Carr and Secretary Peter Charleton. Previous Chairmen of PKW Edward Tamati and Charles Bailey were dual winners of the Trophy as individual farmers in 1965 and 1971, 1970 and 1976 respectively.

An award for young Māori farmers was introduced in 2012 and successive winners have demonstrated that young Māori have the leadership and management skills to take Māori agribusiness forward in the 21st century. Māori success is centred around the need to provide for future generations and so this competition is about ‘future proofing’ Māori businesses.

Today the Ahuwhenua Trophy remains the pre-eminent accolade to win in Māori farming and is recognised as the most prestigious and comprehensively judged award in New Zealand. The entrants, finalists and eventual winners all share and live the enduring values, goals, and vision of Sir Apirana Ngata and the competitive spirit of Lord Bledisloe.

A special book, ‘Ahuwhenua “ Celebrating 80 years of Māori Farming’ was launched by the then Minister of Māori Affairs, Hon Dr Pita Sharples in 2013. It was written by the eminent historian Dr Danny Keenan and traces the history of the Award and gives a brilliant insight into the development of Māori farming over 80 years. This book shows just how much Māori farming has developed over the years and how the Ahuwhenua Trophy has established a strong platform for the future growth. 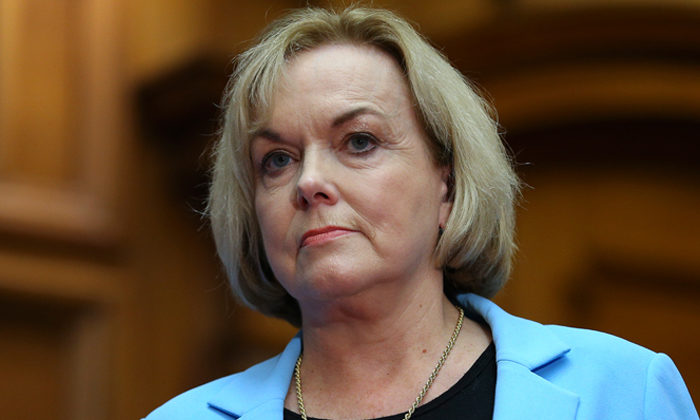 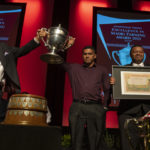