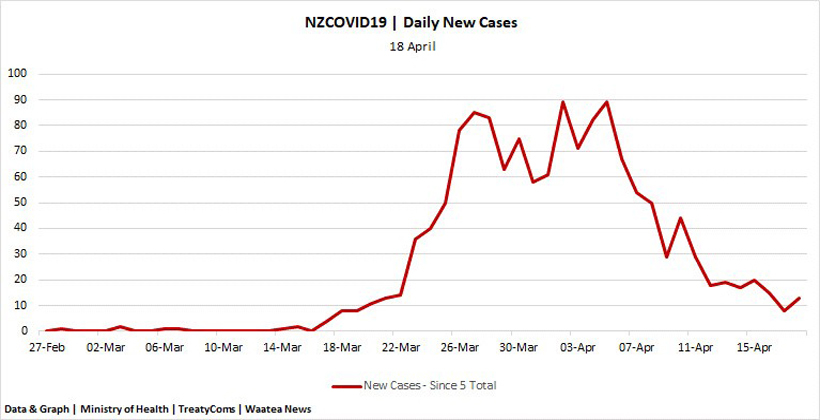 New and Total Cases
New Zealand has 13 new cases and 1422 in total. Despite occasional rises, new cases have been in steady decline over 14 days from a peak of 89 to 13. This is a strong signal that there is emerging control over COVID-19. In other good news, there are no new deaths.

There is more good news with a further increase in recovered cases to 867. Active Cases (the total of all cases less recovered) continue to fall from 930 eight days ago to 544 today.

Widening the gap between recovered and active cases is integral to the discussion the government will have on Monday about when to come out of Alert Level 4.The gap between recovered and active cases should be wider by that time. This writer has a view that we should not move to Alert Level 3 for at least 1 week and possibly 2. There is pressure on the government to reboot the economy.

The experience of other countries, such as Taiwan, Hong Kong and Singapore, is that reopening too early can lead to resurgent outbreaks. They were among the first to relax restrictions, and now report new waves of the disease. Cases in Hong Kong have doubled from 400 to 900 in the last few weeks. All 3 have re-introduced restrictions.

Several other countries, admittedly in worst positions than New Zealand, have for the same reason extended their lockdowns, including India, Britain, France, Argentina, Japan, Lebanon, Colombia, Italy and Belgium to the last week of April or first week of May.

A staged reopening, for example, online shopping start-up sooner, others later, could be an appropriate way forward giving both time to prepare and further time to flatten the number of active cases.

Testing is also picking up again after the Easter slump. Total tests are 70,000 at 15,800tpm (tests per million of population). Internationally, the highest rates are 30,000tpm and some higher than that. We want to head into that territory.

A further 7 cases have been linked to the existing 16 clusters. For 3 days in a row, there are no new clusters. Their isolation is a significant factor in preventing community transmission. There are unanswered questions about the number of Māori and Pacific within the clusters and whether there are other clusters like Marist that are mainly Māori or Pacific.

92% of cases relate to overseas travel (38%) and contacts with known cases (54%). Presumably, these relate to the travellers. 4% of cases are due to community transmission.

There is 1 new Māori case and 121 in total. We remain 8.5% of all cases. Over the last 7 days, there have been 11 new cases. In the first 6 days of April, there were 45. We will have more confidence that the numbers are flattening after testing over the next week. We must thank Māori health providers who have mobilised to ramp up testing. They are making a huge difference to the previously disappointing testing efforts of the Ministry and DHBs among our communities

The writer acknowledges the advocacy of the Te Whakakaupapa Urutā the Māori Pandemic Response Group. Their website provides a range of useful information on how to deal with COVID-19 at a personal and bubble level, and very useful material on policy, research and some of the key issues emerging for Māori.

There is 1 new Pacific case and a total of 65. Pacific rise slightly to 4.6% of all cases. There is a lot of activity among Pacific communities supporting vulnerable members of aiga. They are also being very strong in protecting their mātua.

We can also recognise media outlets such as Māori TV, Waatea News and the Spinoff who have done much more than mainstream to raise awareness about the concerns of Māori and Pacific communities around COVID-19 and concomitant economic and employment impacts.

One of the more moving stories I have been told concerns a proud father of 7 living in a small provincial town who has lost his job. He is doing all the right things and has signed up with WINZ.

For the first time in his life, and with some reservation, he approached a local Social Services organisation seeking a food parcel. A young palagi woman with blonde hair and blue eyes many years his junior served him. He was asked his name, address and how many in his household. When he replied 9, he was asked ‘Are you sure?’ He was then asked for ID, which he produced and confirmation of his address via a document of some kind, such as a power bill. He produced his driver’s license but did not have a bill or letter of any kind. He was declined assistance on the basis that ‘We cannot issue parcels if you cannot provide evidence of where you live’. He said that made him feel ‘small’ and untrusted. He returned home, found a power bill and gathered up photos of his children to prove he has a family of 9 (including wife).

Instead of returning to the same Social Service, he drove a further 70km to another distribution centre in the main town in his region. His heart sank when he saw he was to be served by another young palagi woman with blonde hair and blue eyes. She asked him what his name was, where he lived and how many children he had. He answered the questions and then went to hand over his collection of documents and photos. She replied, ‘there is no need for that, I believe you’.

This graphic presents the number of cases by ethnicity against the ethnic demographics from the 2018 Census, which counts multiple identities, and the Ministry of Health population model that counts a single identity. The two figures establish a Range of Risk. A percentage figure of positive cases approaching the lowest figure in the Range of Risk should be regarded as a concern.

Testing of Māori and Pacific Peoples

DHBs and the Ministry of Health continue to withhold the full data. There are occasional releases of information and while many are positive, there is clear secrecy over poor testing by ethnicity in certain DHBs. I have a report from an attendee at a DHB meeting this week. Testing in their 8,000 plus community to 9 April was much less than 1%.

I have completed an additional analysis of known data on 9 April. This shows that 6 of 8 Māori high percentage greater than 20% DHBs in the North Island and 3 of 4 in the South Island higher than 10% were tested under the national average of 8.1 tests per1000 of population (DHBs shown in grey), meaning Māori and Pacific Peoples were not sufficiently canvassed.

To its credit, the Ministry has released updated data to April 14 showing improved testing of Māori (15.9%) and Pacific peoples (8%). However, these are not yet at the level of the demographics from the Census 2018 (Māori 16.5%, Pacific 9%). Pacific are above the 12.0 tests per1000 although that might still relate to the Marist College cluster. Given our vulnerabilities, both Māori and Pacific should be above demographic.

I have had a communication from an Associate Minister of Health instructing the Ministry to provide data. This is dated 14 April So far there has been no response.

The earlier approach to testing, whether intended or unintended, has exerted white privilege over data and white control over our destinies. Given the rapid rate of transmission within the identified clusters, the Ministry’s monocultural testing regime placed our communities at risk. Testing could easily have missed transfers into our communities with potentially devastating consequences, particularly in the instance of those breaking the isolation rules and travelling through the regions. We will be forever grateful to those volunteers who stood at checkpoints around the motu. We will never know whether they did halt an outbreak. More importantly, we will never know that they did not. Mahi rangatira tērā. Self-sovereign. 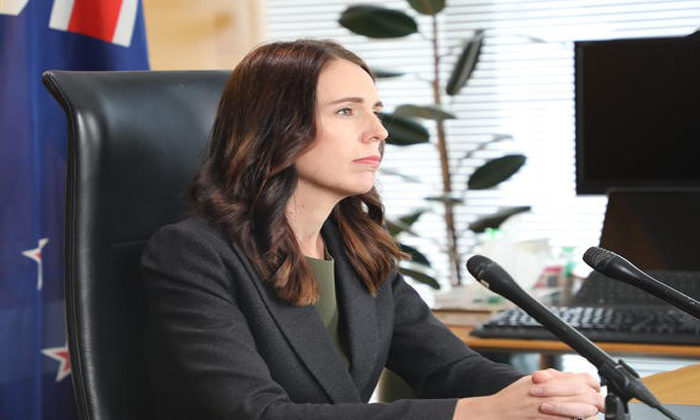 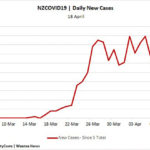