A south Taranaki iwi leader says the Green Party is too stuck in the government machine to be an effective advocate for the environment.

Debbie Ngārewa Packer from Te Rūnanga o Ngāti Ruanui says there are contradictory policies floating about, with a stop put on new oil and gas exploration permits one month, but a permit granted the next to consider seabed mining for ironsand in a Maui’s dolphin habitat.

Conservation Minister Eugenie Sage says she will look closely at that project if it gets to the next stage, but Mrs Packer says that’s not good enought.

"The Green Party was shoulder to shoulder with us in opposing seabed mining. We took 6000 signed petitions to them which they received in parliament. They campaigned off the opposition to seabed mining and the importance of protecting and creating a marine sanctuary so we are really peed at them," she says.

The new seabed mining application came as a real surprise to Taranaki iwi, because the regional council considers such applications non-notifiable. 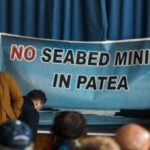