The Scottish Borders Council has voted to repatriate a Maori war flag it has held in its museum for more than 90 years.

Wairoa Museum will pay the costs of bringing back the flag, which was domated to Hawick Museum by Scottish watercolour artist Tom Scott in 1921.

The flag was taken by Crown forces in 1865 in the Battle of Omaruhakeke.

It has only been displayed a handful of times. 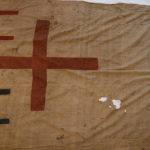