A member of the Jackson Bothers is looking forward to a Māori welcome to Aotearoa New Zealand.

Māori Television presenter Julian Wilcox offered the powhiri during an interview with Jackie Jackson, who joins brothers Jermaine, Marlon and Tito on stage in March to sing their own hits and a tribute to their late brother Michael.

Jackie Jackson says the family has Native American as well as African whakapapa.

And he says his favourite song is the first of the four consecutive number one hits that launched the Jackson Five’s career, I want you back, which always drives the crowd crazy.

The Jacksons perform at Auckland’s Vector Arena on 26th March, 2013

Ngāti Koata ready to move on after token pay-out 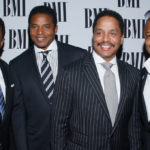