Bay of Islands hapu Te Uri Karaka and Ngati Manu have returned a pou to traditional lands on the Kororareka peninsula.

Te Pou o Opanui was erected in 2002 to guard a wahi tapu at Pipiroa, over the hill from where the Opua Ferry lands.

It was vandalized and thrown into the ocean the following year and drifted to Moturoa, where it was recognised and subsequently returned to the hapu.

To mark its ocean journey, its orginal ochre and black paintwork has been replaced by vibrant blue with bright red teeth while the ngarara or lizard wrapped around it is bright green.

The wahi tapu is where bodies were prepared and placed in the karaka trees that once grew there, from which the hapu name of Te Uri Karaka originates. 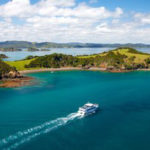