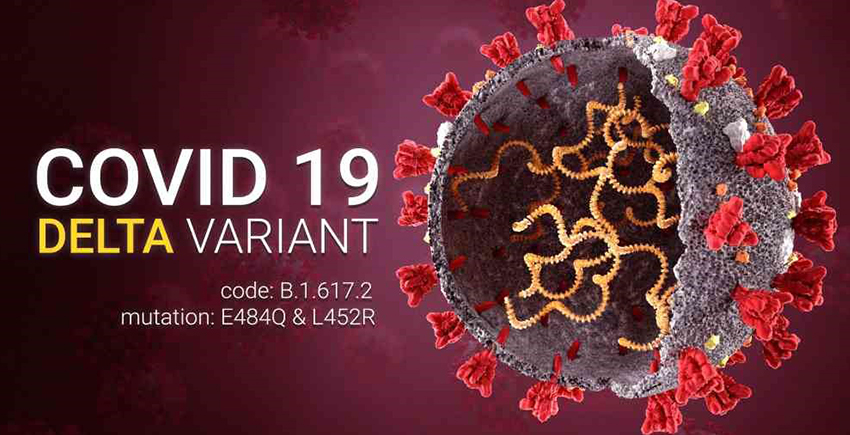 Despite concerns from Māori and mainstream scientists, health professionals, and community leaders,  the government moved Auckland to Alert Level 3 on Tuesday. The Upper Hauraki around Whakatīwai, where four new cases detected since Sunday led to Health Act Section 70 Level 4 type-restrictions, will join Auckland at Level 3 on Friday. The rest of the country remains at Level 2. 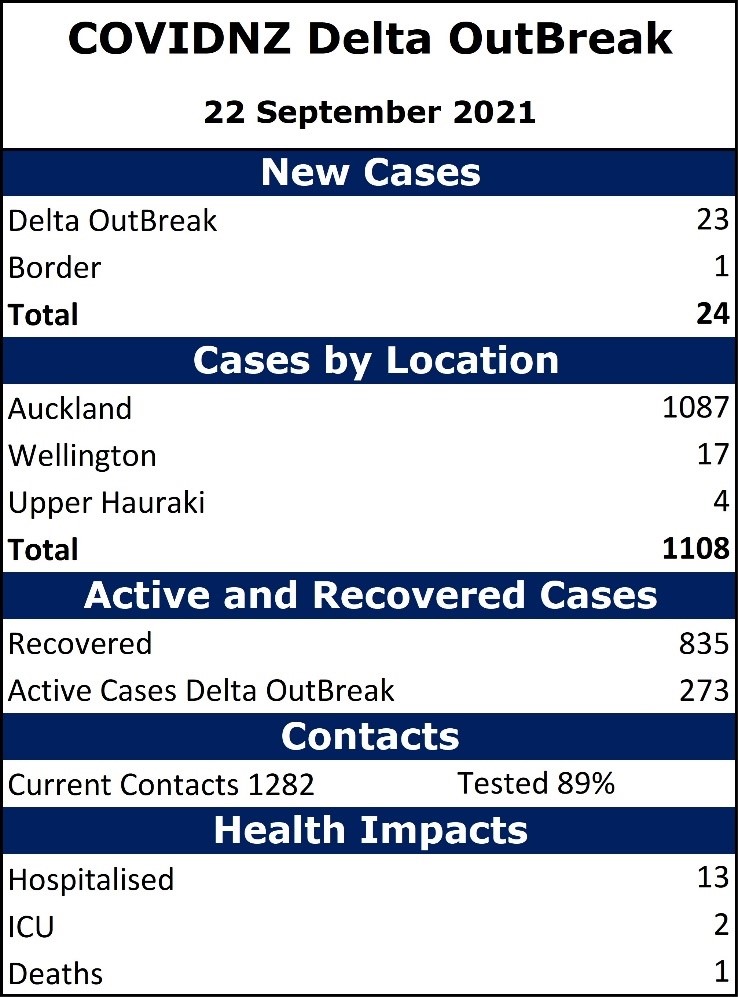 The government justifies moving to Level 3 because despite Delta’s hyper-infectivity most new cases are among those already isolating rather than in the community. They also note that sixteen of 21 clusters and subclusters are no longer active or contained. And while the remaining five clusters are active, just two or three are of concern. The number of ‘mystery’ cases not yet epidemiologically linked to the outbreak, has also dwindled, to eight. Widespread testing in eight related suburbs associated with these cases, centred in South Auckland, Mt Eden, and Massey, has yet to find a link to the outbreak; but more importantly, testing has not found any unknown chains of transmission, which is what counts.

Other figures support the government decision. As of yesterday, 835 cases in the 1108-person outbreak have recovered leaving a more manageable 273 active cases. The number of contacts the Ministry of Health and the Auckland Public Health Service are managing has shrunk from over 38,000 three weeks ago to 1,282 of which 89% have received a test.

The Department of Corrections has informed that the source case of the Hauraki subcluster, on remand at Auckland prison, was not positive when released on bail. This averts another risk, overseas experience showing that Covid-19 spreads rapidly through prison populations.

There are however other risks, including the potential for undetected cases in Hauraki and South Auckland, and that these may drive a new surge. The government and Ministry have by their decision assured us this is not the case.

There is also a concern about the possibility of a secondary bounce-back breach into the community from Delta and border-related cases in Managed Isolation and Quarantine (MIQ). The rising number of recoveries is mitigating that risk, active cases in MIQ having fallen from a peak of 770 in August to 301 yesterday. Nevertheless, that number remains significantly higher than the threshold of 30-active cases above which all breaches into the community this year have occurred. 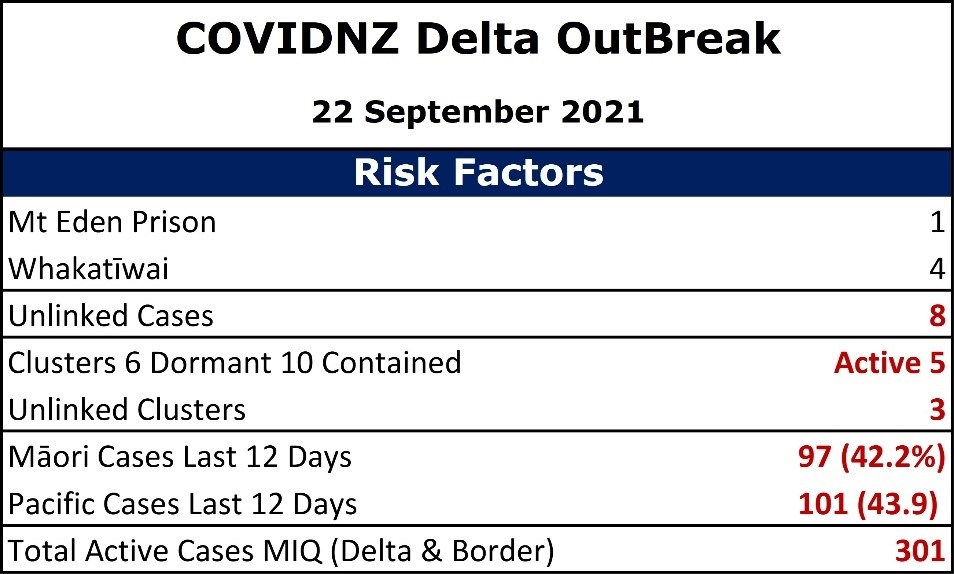 Māori are particularly concerned that there has been a sharp rise in Delta cases among our communities since 11 September. Over the last 12 days, Māori have been the highest number of new daily cases six times and cumulatively 97 (42.2%) of 230 new cases.

Two days ago, the Associate Minister of Health, Peeni Henare, announced an additional $38 million finance package to support the Māori vaccination effort. The government effort is late but welcome; the Māori caucus has worked hard. It is important to close the vaccination gap to prevent a Delta surge and combat future variants.

The Delta Tail Longer and Stronger

The main risk lies with a long and strong Delta tail. The Delta OutBreak parallels the First Wave that struck Aotearoa between February and June last year. The First Wave ran for 26 days before the country entered a Level 4 lockdown on March 25. The First Wave peaked 13 days later. On 27 April, 34 days after entering lockdown, the country moved to Alert Level 3. 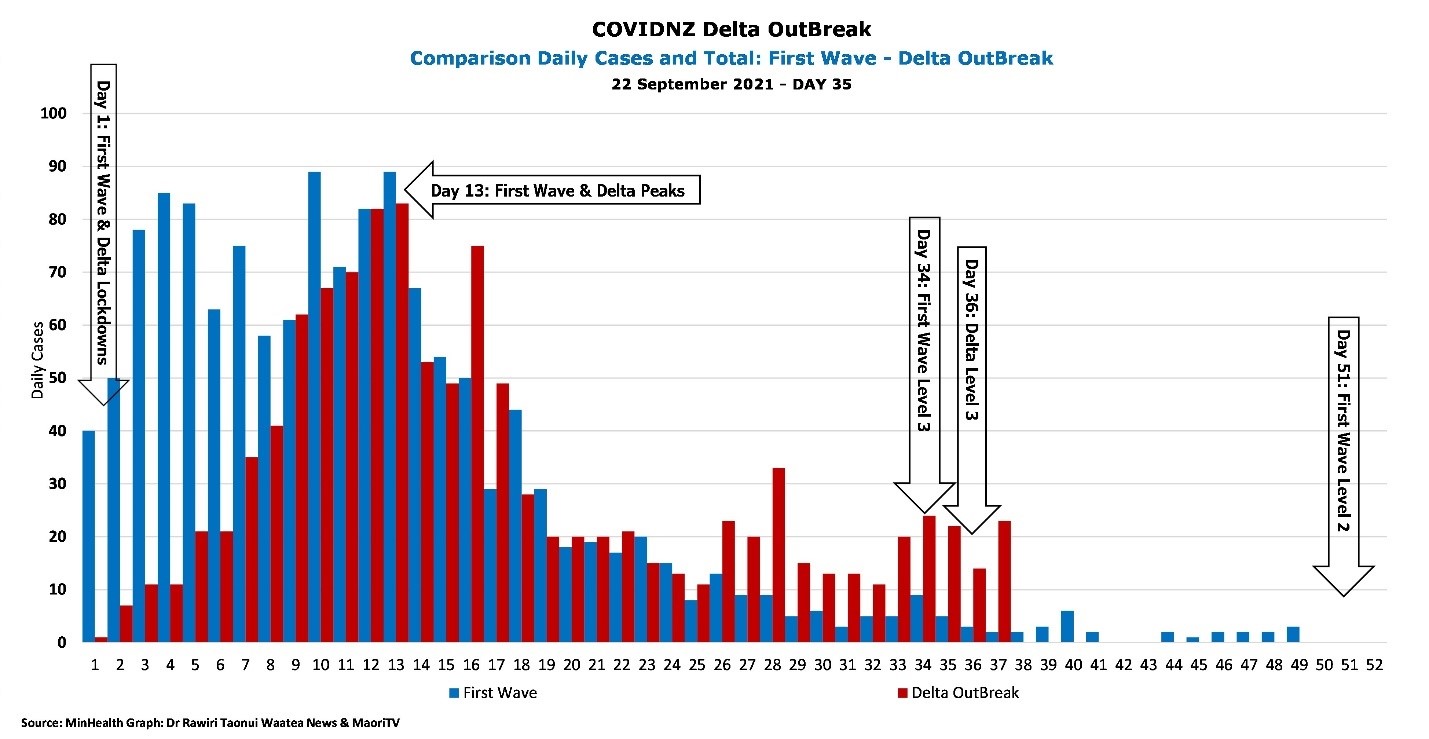 Delta has taken a similar trajectory. The peak came 13 days after Auckland went to Level 4 on 17 August. On Tuesday, 36 days after the lockdown began, Auckland entered Level 3.

The government and Ministry explain this by saying that last year, those isolating with an infected family member could avoid infection because earlier strains were less infectious; whereas with Delta, it is almost inevitable that the whole family will become infected.

If the government and Ministry have made the right call, then we can expect to see single-digit and then zero daily figures during the next two weeks of Auckland Level 3.

Another key figure from last year is that there were 35 new cases during the 17 days between entering Level 3 and shifting to Level 2. Delta has thrown up 37 new cases in the last two days. We need to vaccinate. 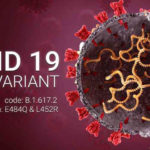