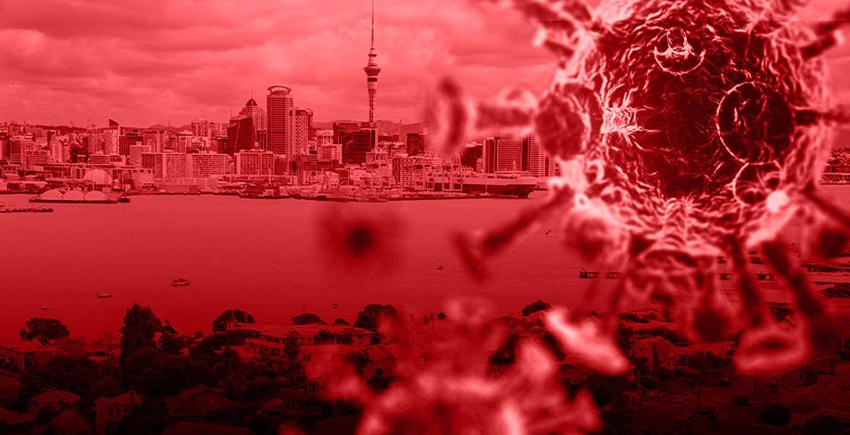 There were 28 new cases in the Delta Community OutBreak yesterday. This is the lowest daily number since 5 October. 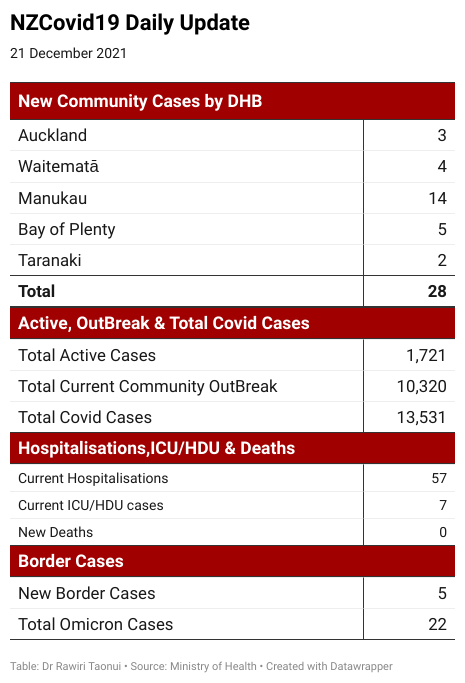 The new cases are in the Auckland (3), Waitematā, Manukau (14), Bay of Plenty (5) and Taranaki (2) DHBs. The Ministry of Health figures aggregates the first three figures into “Auckland.” This obscures that 50% of cases in Auckland are in the Māori-Pacific vulnerable Manukau DHB.

There are five new border cases today. The total number of Omicron cases to arrive in Aotearoa since 10 December is 22.

The number of new weekly cases in the community has fallen for the 4th consecutive week to Monday 20 December.

This is positive news with concerns that the opening of the Auckland border last week and the arrival of the Omicron variant ten days ago separately and together threaten a large surge in cases. 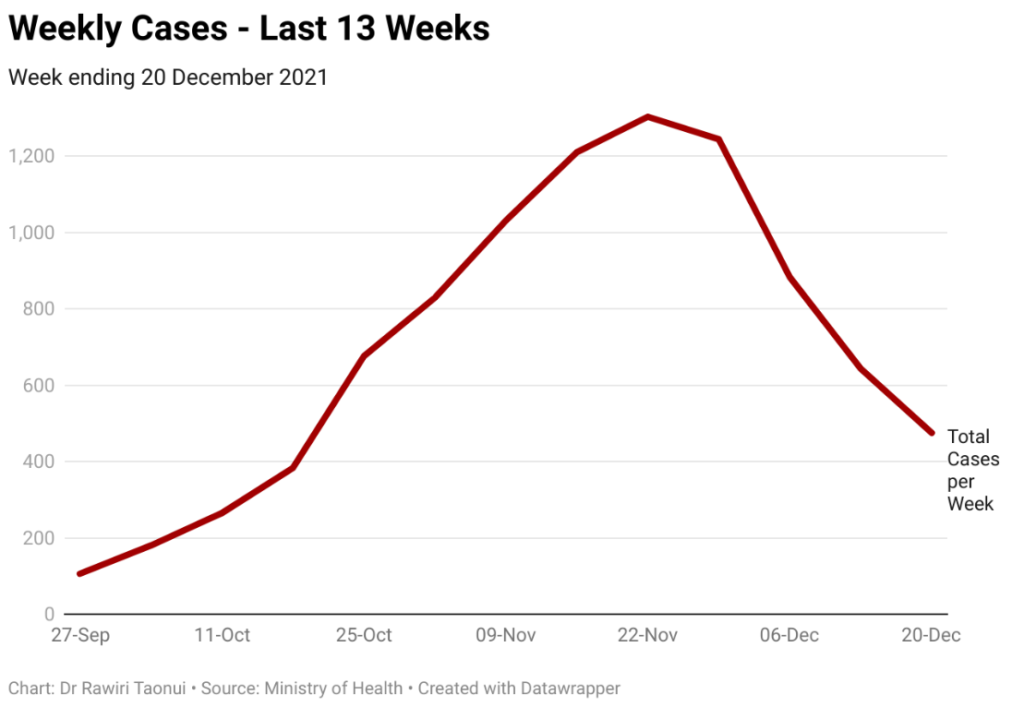 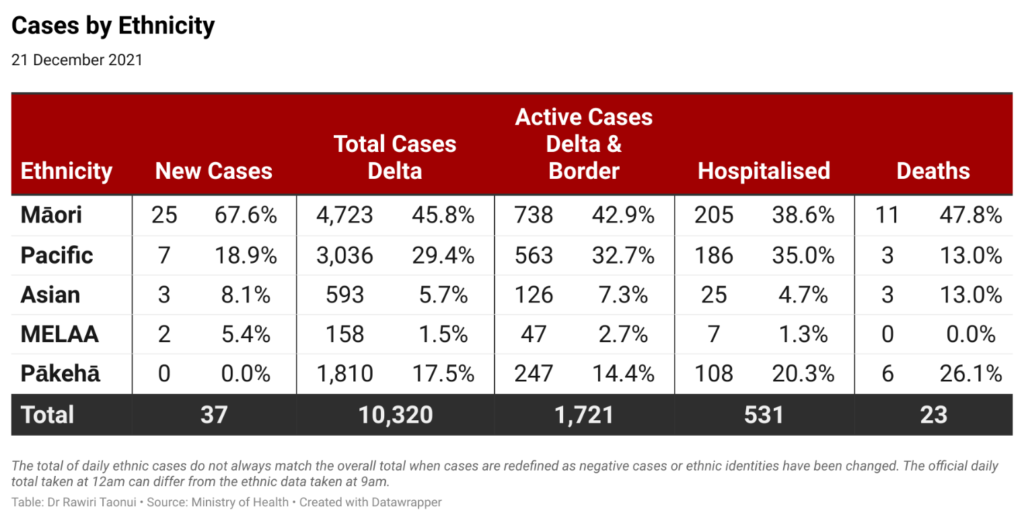 Māori and Pacific continue to pay the highest price in a pandemic managed by Pākehā and driven by mainly European cases entering our borders.

Māori and Pacific were a staggering 86.5% of new cases added to the national total yesterday. Māori and Pacific are 75.2% of all cases in the current outbreak, 75.6% of active cases, 73.6% of hospitalisations and 60.9% of deaths.

Māori deaths are difficult to track. The Ministry of Health announces most deaths in daily Covid-19 updates, usually including age, location, and gender. The Ministry does not announce the ethnicity of deaths ostensibly to protect privacy and the wishes of families.

While one can understand that consideration, it is less easy to comprehend why the announcement of Māori deaths sometimes differs. On occasion, there has been no announcement or only partial information excluding age.

It is possible to track deaths, but this requires constant collation of age and ethnic data because upon each new daily update the Ministry deletes data from the previous day. In the absence of a notified announcement gaps quickly.

A review by this writer, shows there have been 49 deaths since Covid-19 first arrived in New Zealand. Seven deaths have been in the 50-59yrs age group, four in the 40-49yr age group, one in their 30s and one aged under ten.

There were five Māori deaths before the Delta OutBreak. Two of these were Māori brothers in their 50s from Tokoroa who died during last year’s August Auckland Outbreak. As far as I have been able to discern, they were the youngest deaths during Covid-19 last year. There may have been one other death in the 50yrs age group. This, I am unable to clarify.

There have been 23 deaths during the current outbreak of which 11 or 42.9% have been Māori. The first 12 deaths occurred between 4 September and 19 November. Five of these deaths were Māori. One was a Māori man in his 40s who died alone while in home isolation on 3 November in the Manukau DHB. At that time, this was the youngest death since Covid-19 had arrived in New Zealand. A second death on 5 November was a Māori man in his 50s who also died alone in home isolation. A Pacific person in their 50s also died on 6 October.

Since 20 November, there have been a further 11 deaths of which six or 54.5% have been Māori. One was in their 50s. Three were in their 40s with the caveat that one may have been a Pacific person.

A Māori who died on 9 December was in their 30s. At that time, they were the youngest death since Covid-19 arrived in New Zealand.

Late last week, it emerged that a 9yr-old Māori boy died of Covid-19. There was no mention in the daily Covid-19 update. We now know that having become ill, he was admitted to hospital and passed away before testing positive for Covid-19. 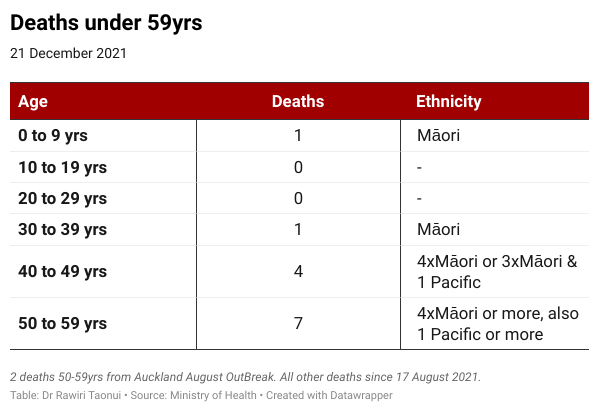 Despite four weeks of declining cases, the increasing number of younger Māori deaths is a major concern. The obfuscation of this data and absence of expressed concern about this in daily Covid-19 briefings tells us that the Ministry and government Māori Covid-19 response is inadequate, defensive, and over-sensitive to criticism. The main strategy has been to reject prioritising Māori based on vulnerability and need, because that might offend Pākehā voters, and provide catchup funding later. The funding has been frequent and often robust, however as the emerging scale of younger Māori deaths demonstrates, post-facto funding rarely compensates for poor strategy in a crisis situation.

With the opening of the Auckland Border and the recent arrival of the Omicron variant, a surge in cases is likely between Christmas Day and New Year’s Day. Māori need to maintain vigilance, increase vaccination and plan to protect lives.