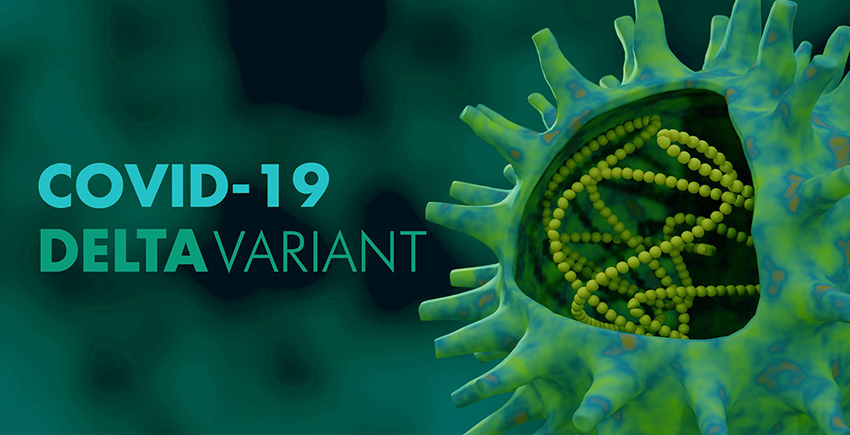 The following projections scope five simple scenarios calculating the number of Delta and Māori cases to the week ending 6 December.

Prime Minister Jacinda Ardern, Minister of the Covid-19 Response Chris Hipkins and Director-General of Health Dr Ashley Bloomfield have repeatedly said that they expect the number of Delta cases to increase then reduce as vaccination dampens the outbreak. First, it was 10- to 20 cases per day, then 30 to 40, now they say 200.

A decrease is further away than they apprehend because even if the population was 90% fully vaccinated Delta has ample access to infect 1.32 million other New Zealanders including the ineligible and 10% eligible but unvaccinated.

The upward trajectory of Delta cases will continue well into December, and probably well into January and February. The average number of daily cases currently reported is 10 times higher than in the first week that Auckland went to Alert level 3. New cases with community exposure events are six times higher, daily unlinked cases 35 times higher and unlinked cases over the previous fortnight 64 times higher. There is a twelvefold increase of active cases to over 2,900, which is higher than the cumulative total of all cases before the Delta OutBreak in August. Hospital admissions are six times higher and climbing.

The first model projects the current 10-day average number of cases reported each day (currently 151 per day, including 67 Māori) at the same number unchanged over the next four weeks. If cases continue without increase, we will reach a total of 8,769 cases including 3,544 Māori by 6 December. 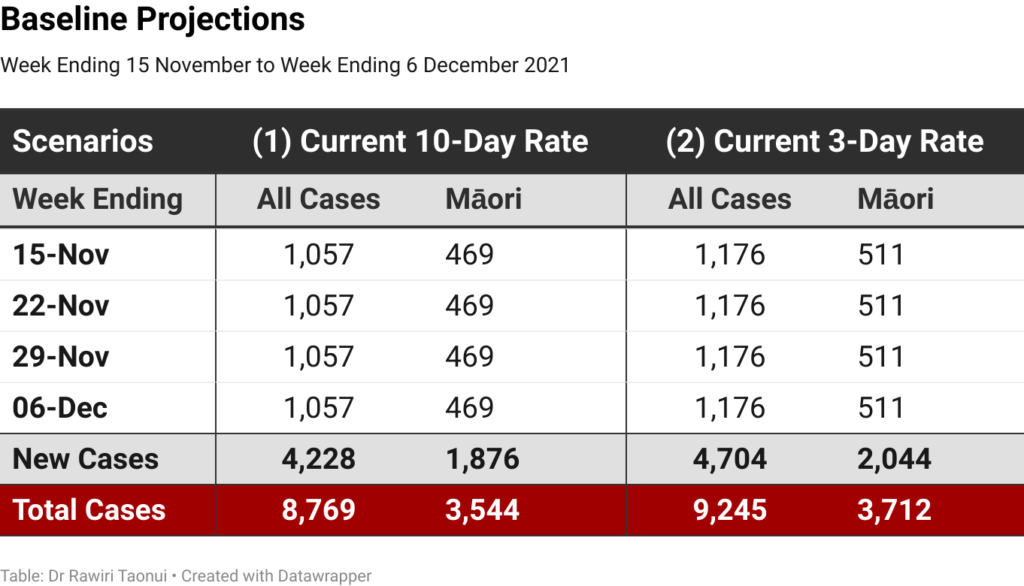 This prediction assumes no increase in case numbers. This is unlikely. With Auckland moving to Alert Level 3 Step 2, more people are moving about, more movement means more cases. Nevertheless, the projection provides a useful minimum baseline of cases.

The second model projects the higher recent 3-day average of reported cases (168 including 73 Māori). If numbers continue unchanged every week without increase, by 6 December there will be a total of 9,245 cases of which 3,712 will be Māori.

This scenario is more realistic than (1) above but again assumes no increase in daily numbers. However, it is closer to an accurate minimum because it recognises the recent 3-day surge including two record days of 190 and 206 cases.

This model recognises that the rate of reported cases will continue to rise in the coming weeks. The projection applies the recent percentage increase between the 10-Day average and the 3-Day average, 17% for total cases (from 151 to 168 per day) and 9% for Māori (from 67 to 73 per day).

The model applies a modestly higher 11% increase for Māori. Māori are 43% of all active cases (1,220), and, while the Ministry of Health has not released the ethnic data, we can assume Māori make up a considerable number of the 1,230 positive cases isolating in households across Auckland. The risk of spread from this base is high. 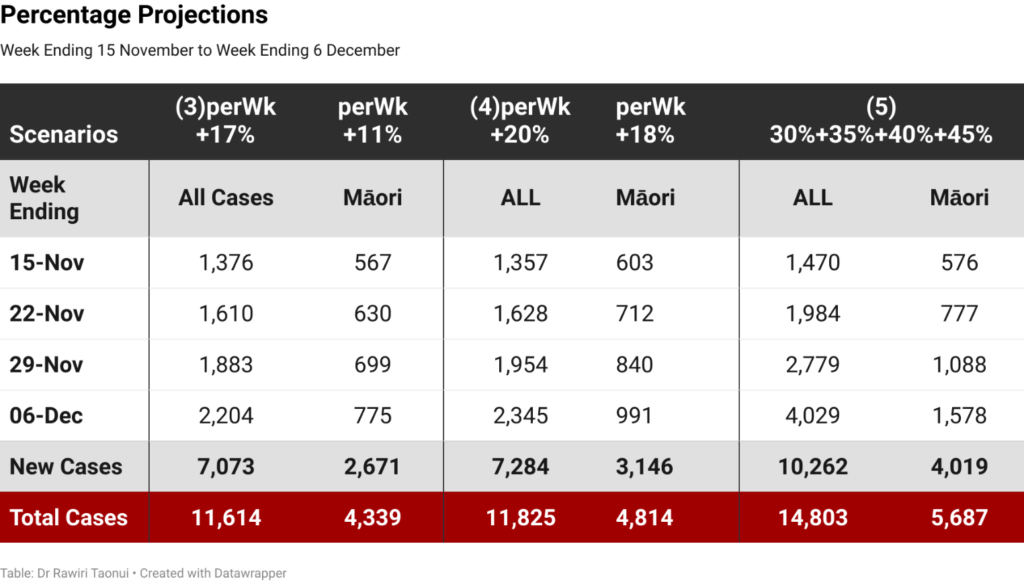 This model projects those percentages over each of the next four weeks. It adjusts the percentages downward (20% and 18%) to factor in a possible dampening effect from rising vaccinations. This is prudent because over the four weeks to 8 November, the weekly rate of increase declined from 53.3%, 33.8%, 42.4% and then 24.4%. The model adjusts the Māori by less because overall Māori vaccination rates are lower.

The fifth model applies a rising percentage of new cases each week if a large-scale event occurs whereby Delta simultaneously breaks into several new regions. With active cases in Auckland, Northland and the Waikato, and positive sewerage tests in Stratford, Gisborne, and Napier, the risk of this is medium to high

The incremental increase of 35%, 35%, 40% and 45% allows for a degree of dampening by vaccination. In this scenario, by 6 December, there will be 14,803 cases including 5,687 Māori. The numbers will be higher if the virus gets into lower vaccinated Māori communities.

Predicting the trajectory of Delta is challenging. The further out the projection, the lower the accuracy.

The proportion of Māori cases will be around 36%. This is lower than the 44% reached two weeks ago because of recent surges in the Pacific, Asian and Pākehā communities.

A second concern is the number of Māori isolating at home. Currently, 1,230 positive cases are isolating alongside 1,430 family and friends in 950 households. The Ministry of Health has not released the ethnic data; however, we can assume that about 50% are Māori. The risk of breaches into other households is high.

The Ministry is providing support but were clearly unprepared for cases on this scale despite multiple reports in June and July of a worldwide surge in Delta cases. There is no evidence of an attempt to increase Managed Isolation and Quarantine capacity or the development of a community home isolation plan.

People in home-isolation report problems with food deliveries and medical supplies either not arriving or going to the wrong address. Those with large households, low financial resources, crowded housing, and disabled family members are the most vulnerable.

As numbers continue to increase, the cumulative social, economic, mental and physical health and wellbeing impacts on Māori may become the largest since World War Two.

The Ministry and government are leaving whānau and communities to plan how to care for the sick and protect their families. Who looks after the solo mum or dad who catches Delta? How do they protect their children? Whānau and marae need to plan. Last week, two Māori men, one in his 40s and another in his 50s died while isolating at home.

Māori will also be concerned about our youth. The 12 to 19yrs and 20 to 34yrs age cohorts have the lowest vaccinations. The average age of Māori with Delta is under 30yrs, about 10 to 12 years lower than for non-Māori. International evidence is emerging that Long-Covid-19 can differentially impact younger peoples in their 20s even those who have had mild disease.

Māori are also concerned with the coagulation of white racism, anti-vaxxers and elements of the Māori self-determination movement. This has happened before, most notably between the 1890s and early 1900s as anti-vaxxers exploited Māori distrust of the government after the Pākehā Wars Against Māori. The outcome was that when the 1913 Smallpox Epidemic struck, Pākehā anti-vaxxers disappeared and got vaccinated while unvaccinated Māori suffered the most deaths.

If Delta can exploit under-vaccinated Māori communities in regions beyond Auckland and the Waikato, the numbers could be significantly higher, and the maximum projections arrive earlier. Whatever the case, Māori are facing Christmas with 5,000 cases. 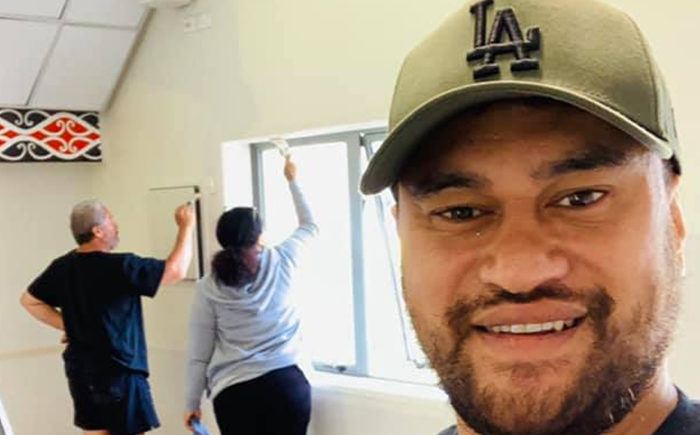 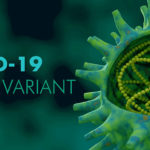