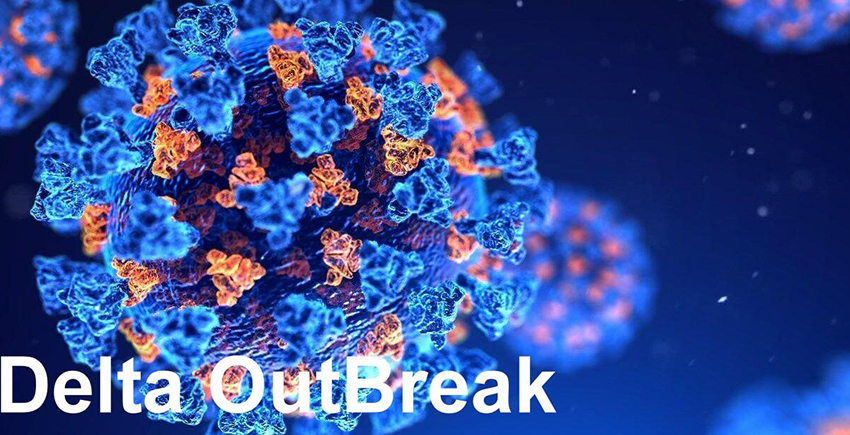 Photo: Supplied.
Auckland should have gone back to an Alert Level 4 lockdown.

Auckland should have gone back to an Alert Level 4 lockdown. With Auckland instead staying at Level 3, the relaxing of protocols within the city, and Delta already moving south, Te Tai Tokerau and Tainui-Waikato Māori should prepare to face their biggest pandemic risk since 1918.

Step 1 applies today. Aucklanders will be able to connect with families outdoors with no more than two households at a time, up to a maximum of 10 people. Early childhood education will return. People can move around Auckland for recreation such as beach visits and hunting. There are no protocols to monitor breaches of these rules.

At Step 2, retail outlets and public facilities such as pools and zoos will open, with the usual measures of wearing facemasks and physical distancing. The number of people who can meet outdoors will increase to 25.

At Step 3, hospitality will re-open, seated, separated and with a limit of 50. Close contact businesses like hairdressers will also open. Gatherings will extend to 50 people. Schools may return when the school holidays end on 18 October.

The government is maintaining Hamilton under Level 3 with restrictions on travel in and out of the city. Despite multiple attempted breaches of the tightly controlled Auckland border, there will be no borders checkpoints in the Waikato, only random checks.

In response to queries about the often high number of new cases during Level 3, Prime Minister Jacinda Ardern and the Director-General of Health Dr Ashley Bloomfield have repeatedly said that the Ministry has control of the outbreak and that ‘ups and downs in case numbers’ is quite normal and expected because Delta’s greater infectivity means that more people living with an isolating family member will get infected than with less infectious variants last year.

This is not entirely true. While Delta is more infectious, the numbers are anything but normal. During the first 13-days of last year’s First Wave Level 3, there were 30 cases. There have been 272, nine times more, during the first 13 days of Auckland Level 3. 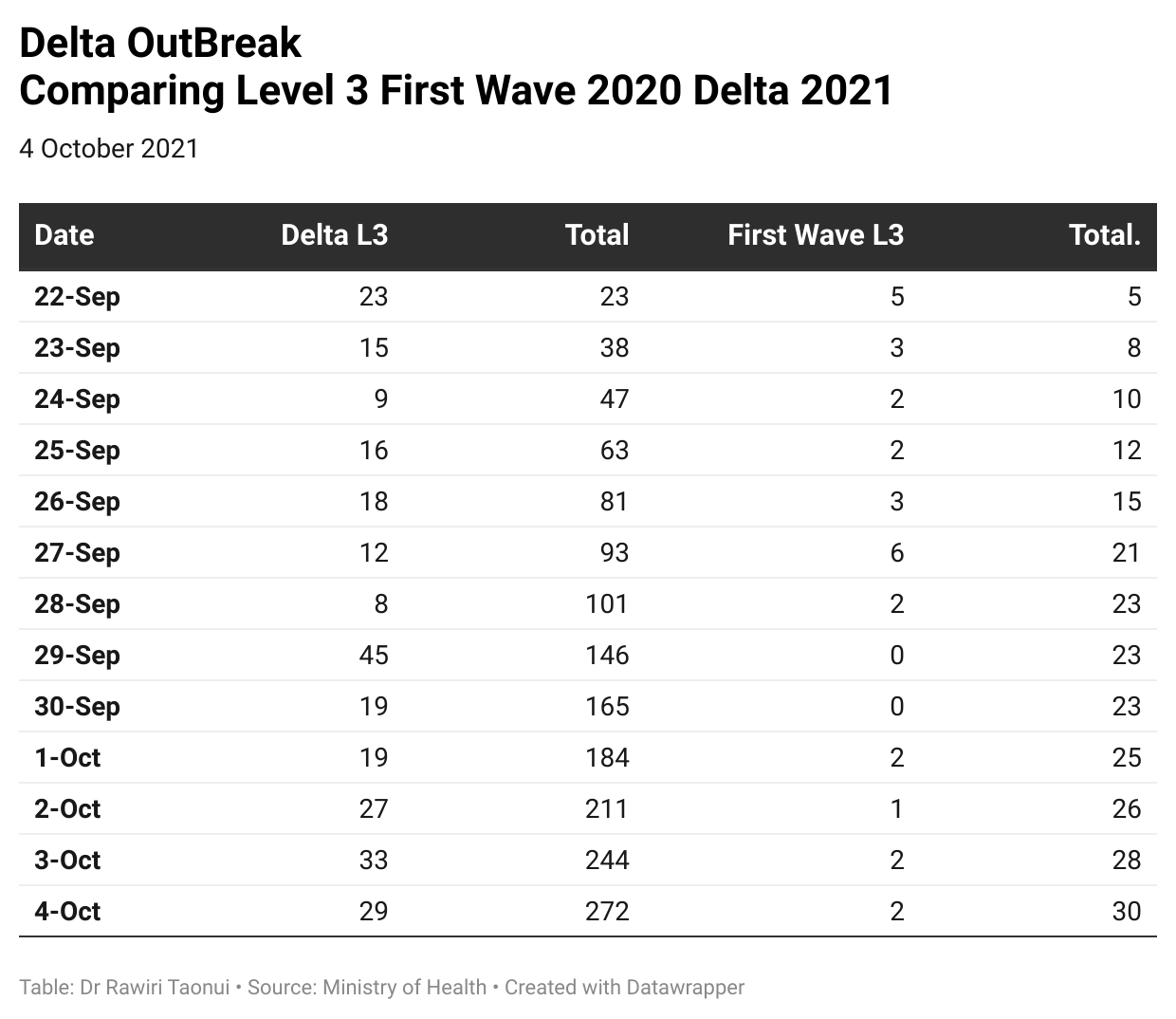 A week ago, the Prime Minister and Dr Bloomfield also said the average number of cases per week is declining. That is not the case. Even with one day short of a full week, the second week of Auckland Level 3 already has the third-highest daily average and case total of the outbreak. 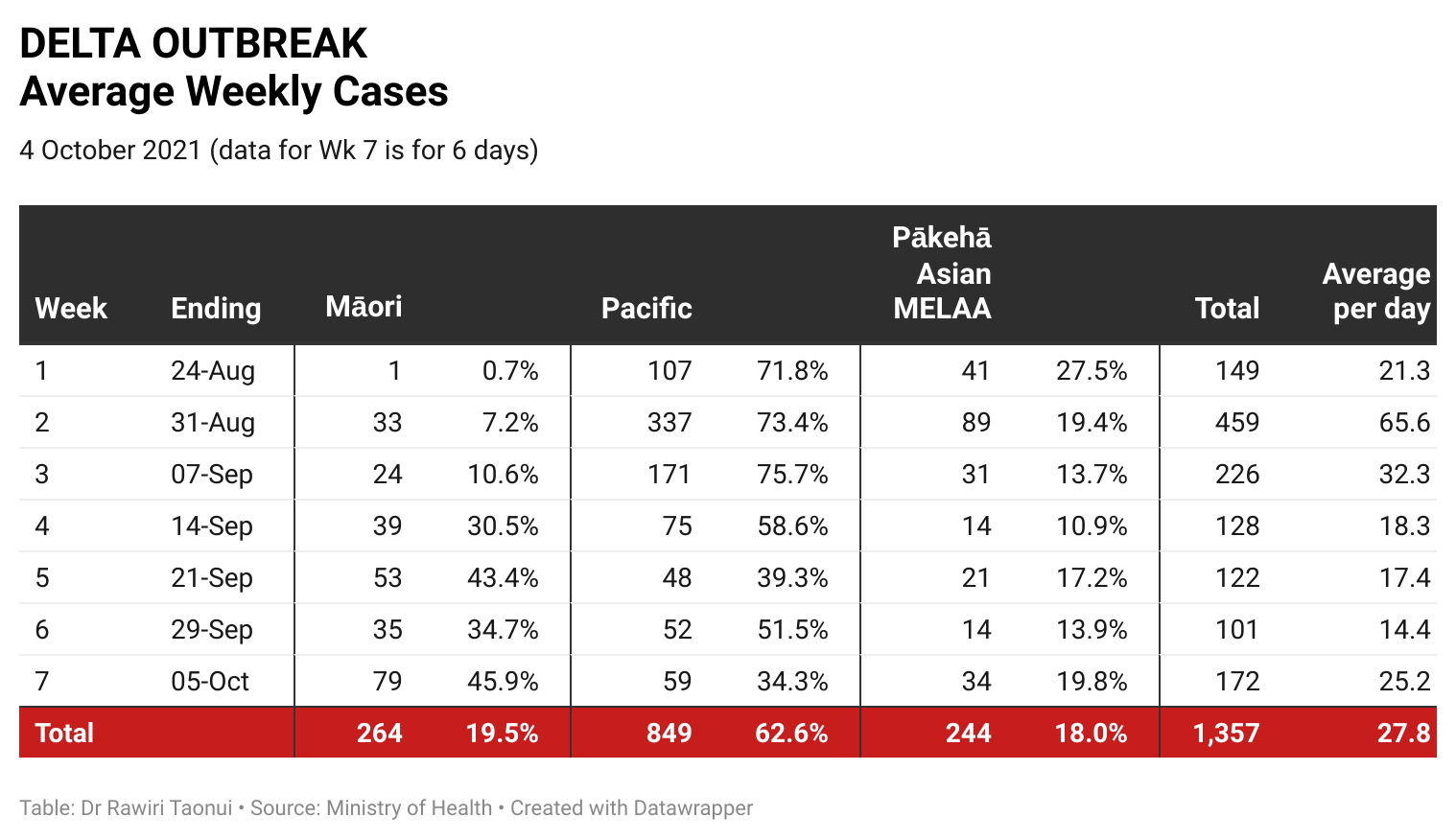 The Level 3 decision fails to heed the underbelly of community transmission in Auckland. A comparison of risk indicators from Day 1 (22 September) and Day 13 (yesterday) show Level 3 has encouraged rather than curbed the outbreak.

The number of new cases with ‘exposure in the community the previous day’ is 2.7 times higher than on Day 1. Unlinked cases ‘over the previous fortnight’ have tripled. The number of unlinked clusters/subclusters and those that are active have also increased. Hospitalisations and ICU cases have more than doubled. 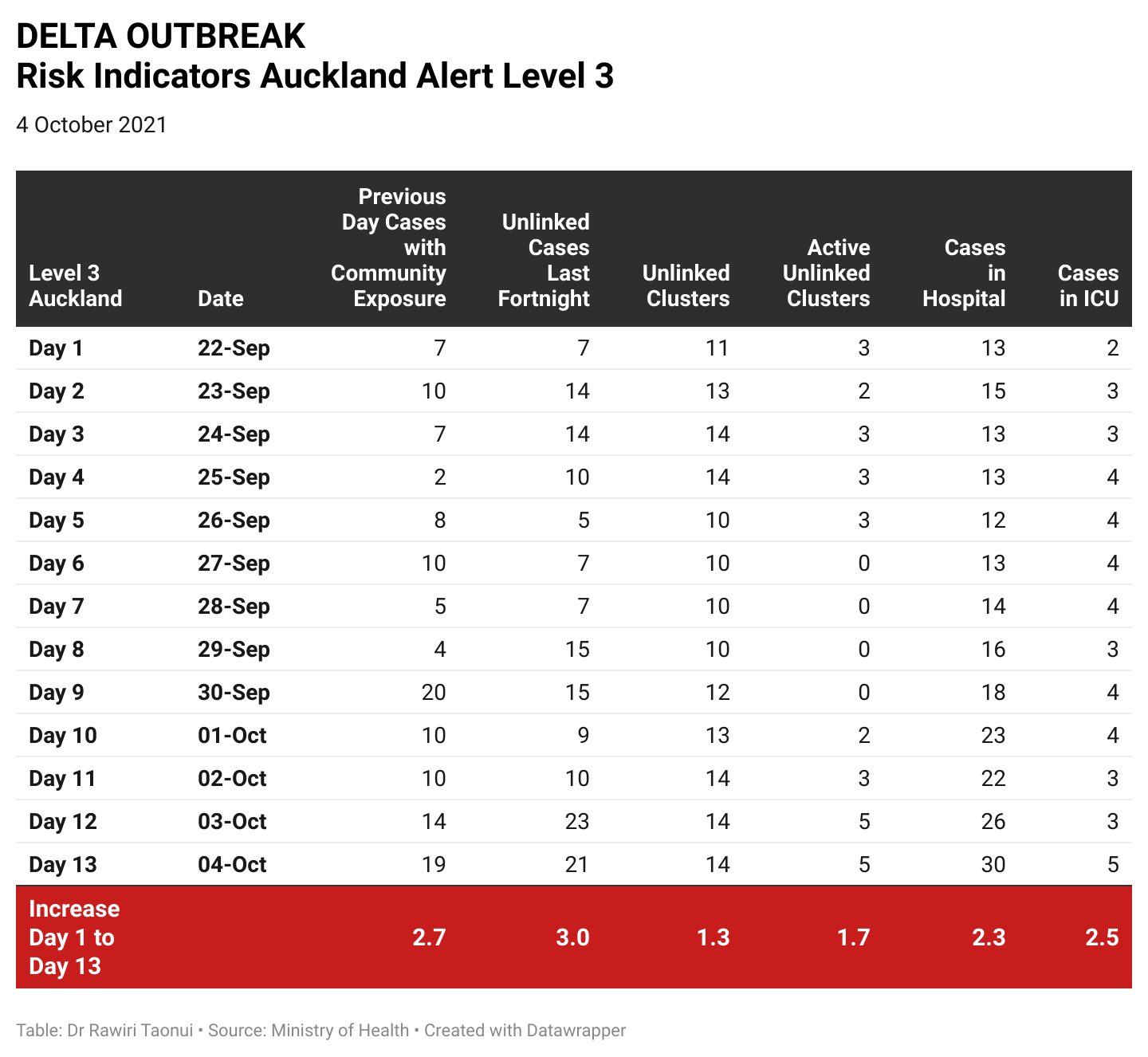 With random cases regularly detected in hospitals (five at Middlemore, two at Waitākere and a new case at Auckland Neonatal ICU), three in gang communities, and 20 or more in transitional housing rather than through contact tracing and systematic testing, Delta is on the move among the impoverished, lower socio-economic and marginalised periphery of Auckland, principally among Māori.

Halting this will be difficult. The experience of marginalized Māori in education, social welfare, justice, housing, and health means they do not trust the government. With Māori health providers and Whānau Ora agencies pressed in the vaccination effort, there are limited resources to support these communities.

Level 3 is also helping Delta become more mobile. Two weeks ago, the Ministry of Health listed seven priority suburbs, Mt Eden, Massey, Māngere, Favona, Ōtara, Papatoetoe and Manurewa. Some have been removed from the list, however, but the geographic extent has extended further south, west, and north into Takanini, Henderson, and Mt Wellington. More people moving around during Level 3, allows Delta to move and disguises transmission in poor communities. The new Step 1 Level 3 protocols will exacerbate this situation.

The Impact on Māori

The government decision ignores the differential impact of Level 3 on Māori communities and a Te Tiriti o Waitangi duty to actively protect Maori. Māori (114) have had the highest number of cases under Level 3. Māori cases exceeded our demographic share (16.7%) on 29 September. We are now 19.5% of all cases. 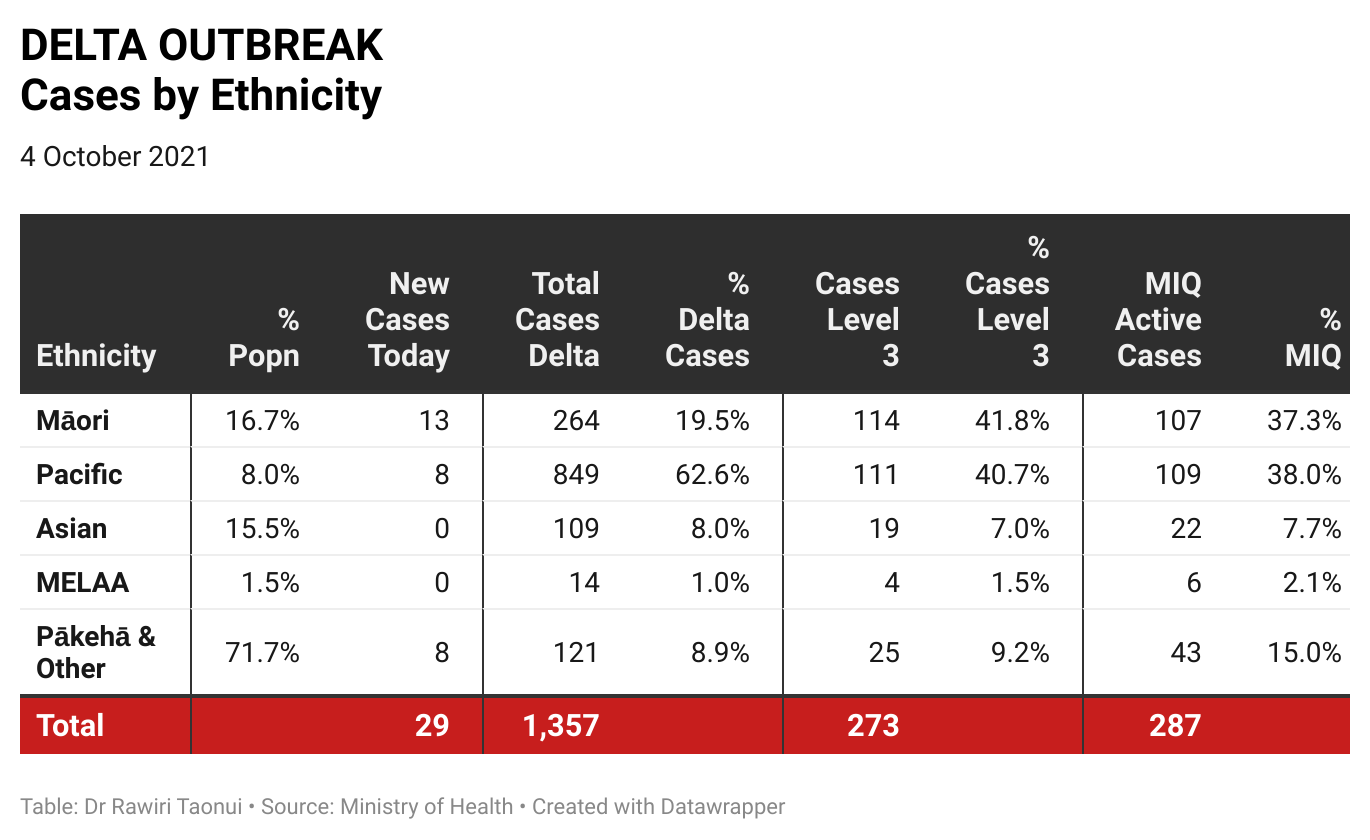 Total Māori cases passed the combined total of all cases in the Pākehā, Asian and MELAA (Middle Eastern, Latin American, and African) communities on 30 September. Over the last week, new Māori cases (83) have outstripped Pacific Peoples (64).

The Auckland to Tauranga and Palmerston North truck driver incidents and new cases in Raglan and Hamilton foreshadow Delta moving beyond Auckland. The new protocols will facilitate more movement within Auckland. Delta will breach the Auckland borders again.

Pandemics in the West begin in white affluent communities. They spread into poorer brown communities. The former decides the priorities. The latter live with the consequences. This is why Aotearoa went to Level 4 on the basis of a single North Shore case on 17 August but not back to Level 4 after 225 Māori and Pacific cases in 13 days at Level 3.

If Delta takes hold north and south of Auckland, the high Māori-demographic regions of Te Tai Tokerau and Tainui-Waikato will face their gravest health emergency in a century.

The government is right about one thing, Pākehā cases are going down. 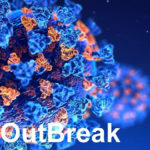