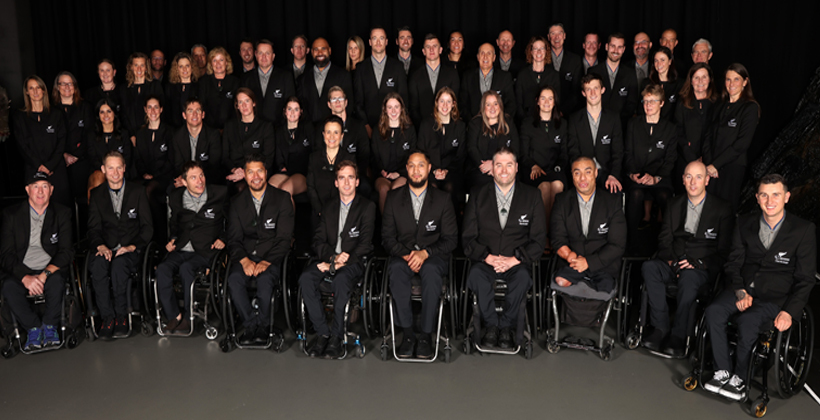 Last night, at Weta Workshop in SkyCity, the New Zealand Paralympic Team selected to represent New Zealand at the Tokyo 2020 Paralympic Games was presented formally for the first time and farewelled, in the presence of the guest of honour, the Prime Minister, the Right Honourable Jacinda Ardern.

Over 150 Paralympians, Para athletes, support staff, supporters and special guests, including the Minister for Disability Issues, the Hon Carmel Sepuloni, joined the celebration marking exactly ‘39 Days to Go’ until the opening ceremony. Hosted by One News Sports Reporter Michelle Prendiville, the 28 selected Para athletes were called by name and asked to join Tokyo 2020 Chef de Mission, Paula Tesoriero, on stage to receive their Pounamu. Support staff were presented with their Pounamu at a special presentation in the afternoon.

Fiona Allan (Chief Executive, Paralympics New Zealand) said: “New Zealand Para sport has seen staggering growth and success since the Athens 2004 Paralympic Games. At Athens 2004, we were ranked tenth in the world per capita for medals won. By London 2012, thanks to the support of High Performance Sport New Zealand and Paralympics New Zealand members and partners, we were first in the world per capita for medals won. We went on to retain this title at Rio 2016. Our Para athletes are amongst the best in the world. We know that their performances will inspire the next generation of Paralympians and drive social change and inclusion for all New Zealanders. It gave us all great pleasure to be able to mark their achievements last night and acknowledge the partners that have made the Tokyo 2020 campaign possible.”

The evening included a keynote speech from the Prime Minister, the Right Honourable Jacinda Ardern, who spoke about the courage, resilience and determination of the Para athletes and support staff through challenging times and commended them for the inspiration they will give to all New Zealanders. She wished them all the very best and good luck on behalf of all New Zealanders.

Fundraising partner Harvey Norman presented a cheque to PNZ for $300,000.

Since 2018, Harvey Norman has embarked on a major fundraising campaign in support of NZ Paralympians. All Harvey Norman stores around the country have been selling Paralympics New Zealand merchandise and collecting donations to help to support NZ Paralympians. In 2016 Harvey Norman presented a cheque of $320,000 to support the team to Rio and the funds received last night will help significantly towards sending the team to Tokyo, and then only a few months later our Paralympians into Beijing and only three years later into Paris. Allan says I can’t thank the Harvey Norman team enough. To have over 2,000 people working on our behalf in this way and to have had such a huge response from customers and suppliers over such a short timeâ€¦ this will make an incredible difference, especially as we build toward Beijing 2022 and Paris 2024.”

Para athlete Barney Koneferenisi recalls the first practise saying: “That first practise was really hard as I face planted so many times. Wheelchair rugby has been part of my life for a such long time now. I had originally decided not to aim for selection for Tokyo as I was focussed on starting my own business, a ride share app for marginalised groups such as disabled people, women and people with pets. With Cam’s withdrawal I was fortunate to have this opportunity and to now be part of the New Zealand Paralympic Team to compete in Tokyo for my country is incredible. I can’t wait to get on the court and give it everything I have.”

She continues: “My goals in Tokyo 2020 are set firmly on retaining my titles from the previous three Paralympic Games, along with bringing excitement into New Zealander’s living rooms on the screen.

Paula Tesoriero (Tokyo 2020 Chef de Mission) said, “We are focussed on creating the safest possible high performance team environment in Tokyo, while providing the opportunity for our athletes to thrive and succeed.” She continues, “I look forward to welcoming our first Para athletes into the village on 19 August.”

The Tokyo 2020 Paralympic Games will be held from Tuesday 24 August to Sunday 5 September 2021 and will include 22 Para sports on the event schedule and up to 4,400 Paralympians competing. The Paralympic Games is the largest event worldwide for driving social change and inclusion.

The Tokyo 2020 Paralympic Games will be broadcast live with TVNZ. Viewers can catch all the action of the Paralympics as it unfolds each day on TVNZ DUKE (Freeview Channel 13 and Sky Channel 23). Coverage will also be live streamed through TVNZ OnDemand, with catch up viewing of select events available on the platform. 1 NEWS will support the live broadcast with extensive coverage of our New Zealand Paralympians as they go for gold in Japan across TVNZ 1’s daily news programming and 1news.co.nz.

Paralympians and Para athletes selected to the New Zealand Paralympic Team include:

Support staff selected to the New Zealand Paralympic Team include: 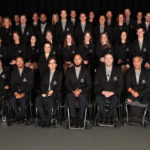