National Party leader Judith Collins says if she had the chance she would have agreed to an apology for the dawn raids.

The Wellington Covid restrictions have forced the postponement of Saturday’s ceremony in Auckland to issue a formal apology for the harsh immigration enforcement policy in the 1970s that led to police raiding homes, schools and factories and stopping random Pacific and Māori people on the streets to demand documentation.

Ms Collins says it was something she researched when she first got to parliament, and saw it was driven by fear, prejudice, and people looking for a scapegoat for tough economic conditions.

"It started in 1973 under Norm Kirk and it continued with gusto by Rob Muldoon under National and I think it's one of those parts of our history we need to accept as an extraordinarily poor time watching quite disadvantaged people brought into the country to work in factories and to drive the economy being treated really badly," she says.

Ms Collins says the way the Government is treating the families of foreign workers affected by Covid restrictions shows little has been learned from the dawn raids era. 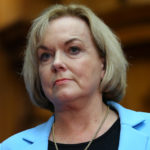