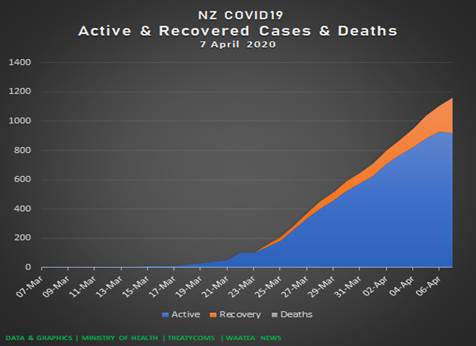 The last three days have seen a decline in the number of new cases, in sequence 89-67-54. With increased testing the trend is very positive; there were 3,700 tests on Sunday and 2,900 tests yesterday. A total of nearly 44,000 tests have been conducted which compares well with other countries of our size. There is no room for complacency. It is too early to predict whether this trend is permanent.

Active Cases down for the first time since March 22

There are now 241 people who have recovered. The active total of 919 is down from 930 yesterday. This is the first decline in active cases since total cases passed 100 on March 22 (see top end of blue section in graph).

Māori cases increased by 4 to a total of 91. This is a 4.6% increase: the lowest this month. Māori are now 7.8% of all cases. Although just a fractional decrease of 0.1% on yesterday, this is the first decrease this month in our percentage of all cases. We will know more if we get more Māori tested.

Pacific Peoples’ cases rose by just 2; a 5.2% increase the smallest this month. They are 3.4% of all cases which is good.

Concern about Testing in Māori Communities

While there are several positive signs today, the overall number of total, Māori and Pacific Peoples’ cases continues to rise. There is no room for complacency.

Concerns continue to be expressed about testing in Māori communities. I have two figures from DHBs. One from a single testing station located at a Māori Health Provider in Taranaki with a 17.5% Māori demographic showed testing of around 100 people over one week included 27% Māori. This a micro sample but positive. Another from the Nelson-Marlborough DHB with a 10.5% Māori demographic showed testing of 1000 people over one week that included only 2.7% Māori. This larger sample is deeply concerning if representative in other regions.

There is emerging evidence that the outcome of the shift to consultations by internet or phone when lockdown started on March 27 has led to a significant decrease in people contacting doctors and medical centres.

If you think you or any of your whānau or aiga have symptoms call your doctor or Healthline on 0800 358 5453 or approach the local Māori testing site if one is in your area. Technically, I am breaching the rules in making this last recommendation, however, the impression from community is that this is a very real issue. The same applies for Pacific Peoples.

Most of you will have watched the very good daily briefings from the Ministry of Health and the wonderful Director General Health, Dr Ashley Broomfield. There is concern that the Ministry deletes the data for ethnicity, age and gender from the previous day when it updates for each new daily briefing. Data for Māori (and Pacific Peoples) is difficult to access. We need this data to inform our communities so that they are empowered and able to make the best decisions in the interests and health of their communities. This is not acceptable. Technically, storing the online briefings as PDF files would take less than half a dozen clicks of the mouse to establish. There are multiple discussions on this kaupapa.

I have returned to the originally style of the graphs on the instructions of my tamariki. 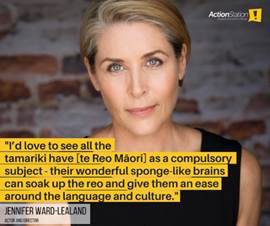