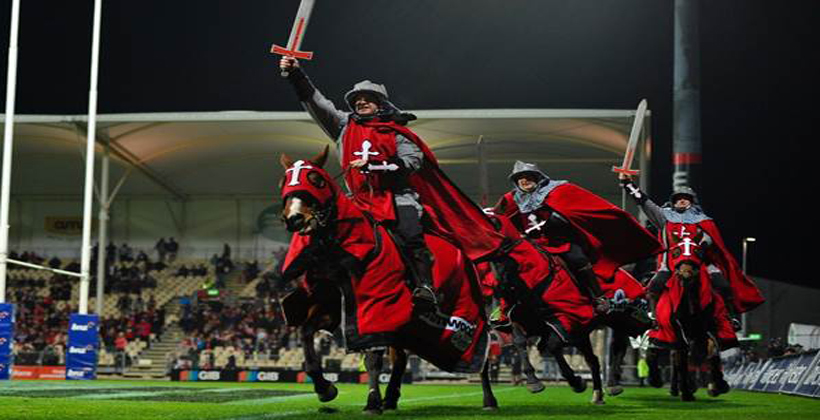 Rugby, Racism and Xenophobia Mā māminga, mā tinihanga, ka oti te mahi – ‘By trickery we can achieve’. The Crusaders rebrand has retained their name, dropped the knight logo, discontinued the sword wielding horsemen, dismantled the castle and failed to make a stand against racism and xenophobia.

My rugby keen whānau attended many Crusaders games when we lived in Christchurch. At first, I was surprised that local Māori supported the Crusaders because for many North Island Māori the Medieval symbolism was synonymous with white racism. We now know that others, such as former Chair of the club, Donald Stewart, shared the same reservation.

The horsemen were also fascinating. Encapsulating English heritage, high country wilderness and the Canterbury plains, when they rode out clad in Crusader crosses and swords aloft to the rumble of Vangelis’ 1492, hailing Christopher Columbus and the beginning of cultural genocide against Amerindians, they inspired a collective identity like no other mascot in New Zealand Rugby.

The Crusaders also stress that ‘it is important not to link the team to the March 15 shootings’ that killed 51 members of the Muslim community in Christchurch. True, however, disavowing the wider link between their name, the Crusades, colonial racism, rising domestic and international white supremacism, March 15 and what that continuum evokes for non-European cultures is seriously misguided.

Heeding the call of Pope Urban II to ‘wrest the Holy Land from the wicked and despised race’, the First Crusade slaughtered ‘Christ-killer’ Jews across France, Germany and Bohemia in an act now called the ‘First Holocaust’. Then, under the Latin war cry of ‘Deus vult!’ (God wills it!), they indiscriminately butchered Christians and Muslims at Antioch, Jews and Muslims at Jerusalem and at Ma’arrat ‘boiled adults in pots and impaled children on spits, grilled and ate them’.

Proving false the idea that the Crusades were defending Europe from Muslim hordes, the Fourth Crusade sacked the Christian cities of Zara and Constantinople and the later Northern Crusades cleaved their way through Baltic Europe killing, converting and/or enslaving white Slavic populations including processing men through castration houses in Prague, Venice and France.

By the end of the Middle Ages the word ‘crusade’ was used to justified all wars against non-Christians as undertaken on God’s behalf . This Crusading spirit carried into colonisation. Building on Urban’s precedent, Pope Nicholas V issued the Papal Bull Dum Diversas (1452) granting Europe the right to ‘invade, capture and subjugate unbelievers’ seize ‘their kingdoms, lands and other property’ and reduce them to ‘perpetual servitude’.

Crusading became an all-encompassing ideology. Non-Christians were deemed controlled by the Devil and therefore evil. The white man’s burden was to colonise these people to save them; by the Bible if possible, by the sword if necessary. Those who went forth to ‘discover new lands’ saw themselves as soldiers of the cross on holy crusades. Vasco da Gama, Christopher Columbus, Hernan Cortez and James Cook flew or wore a red cross of some kind.

Photo supplied
President George Bush rekindled the spectre of 'Crusade' when launching the War on Terror. Causing more than two million deaths in Iraq alone, the majority were civilians culled by the ‘Coalition of the Willing’ in pursuit of weapons of mass destruction and Al Qaeda that did not exist.

The Crusades also have expression in the iconography of contemporary white supremacist violence, including red cross emblazoned shields and the cry ‘Deus Vult’ during the 2017 Charlottesville ‘Unite the Right’ rally.

Contrary to the history previously on the Crusaders site, some marketing dork in a dark room chose the name for NZ Rugby who in turn advised it to the Cantabrians. This was ill-advised. Christchurch was already the capital of white supremacist hatred in New Zealand and the home of the Right Wing Resistance and White Pride Worldwide both of which educed Crusader phantasms to advocate race war against immigrant communities.

Photo supplied
Inspired by Norwegian mass killer Andres Brevik, who claimed membership of the Crusader Knights Templar, the Christchurch shooter also invoked Crusader symbology. The Global Terrorism Database has shown that a third of the perpetrators responsible for 350 white supremacist shootings across the world between 2011 and 2019 shared online connections, ideology and intent. It is therefore disingenuous and culturally narrow to disavow linkages between supremacist Crusader heritage.

Photo supplied
The Fan Base
Fans love the tradition and history of the Crusaders. A OneNEWS Colmar Brunton poll had 76% of New Zealanders supporting retention of the Crusaders name. A NZR commissioned poll showed 50% of the general public and 60% of fans wanted to retain both the name and all imagery, including the horsemen. Two petitions supporting name retention received 39,000 signatures; fewer than 130 signed two petitions against.

Impressive support? Yes. Many of more than 3,000 supportive petitioner comments speak to long term family connections, going to the rugby with dad and an explicatory post-quake spirit. With those simply saying ‘No change’ these comprise over half of all comments.

Other comments raise concern. About a third were ‘anti-PC’ ‘anti-political correctness’. Code for opposing measures to raise tolerance and inclusivity and reduce racism and xenophobia, the language of these posts was often constrained likely because most were written during the immediate aftermath of the shootings.

Others were far less constrained. Many believe the team truly does represent Christian Crusader heritage, writing, ‘Deus Vult’, ‘We are a Christian country’ and ‘Back in the day the Crusaders were a proud Christian based army crusading for what they believed in … changing the name would be an insult to my ancestors’ and ‘I am offended as a Christian that the Crusaders name is being threatened â€¦ it heralds from the Christian Crusades that valiantly tried to stop Muslim hordes attacking Europe, seizing countries and murdering thousands of Christians’.

Reflecting a darker under-belly of supremacism, others were directly xenophobic: ‘We are Crusader supporters, now and forever. We won’t change to suit Muslims who are offended by the existence of all non-Muslims’, ‘It's only a name, Muslims should p**s off back to the hole that they crawled out of’, ‘Why should we bow down and hide our past because of a small minority … let them suck it up for a change’, ‘NZ is NOT a Muslim country; Islam is HATE SPEECH’, ‘A Muslim prayer broadcast nationally, What next? We all wear burkas?’ ‘F**k Muslim sensitivity’.

While writing this column I received other comments, such as ‘I don’t give a f**k about Arabs dying because they are always going to be killing each other in the Middle East’, and ‘Muslims need to harden the f**k up’.

How the 51 victims of March 15 could suck or harden up is beyond this writer. More certain is that many fans suffer significant ahistorical error ridden ignorance. History clearly shows that Europeans have caused more Muslim deaths than the other way around, the latest effort being the abandonment of Syrian Kurds. Equally true is the conclusion that an ugly intolerance and bigotry has skewed polls petitioning preservation of the Crusader moniker.

A Predetermined Rebrand The Crusaders rebrand was a foregone conclusion. Immediately after March 15, the Crusaders firstly defended their name, then a few days later said they would consider change’, discussions confirmed by NZR CEO Steve Tew.

This changed on April 3 during a series of announcements that collectively presaged the outcome. Independent researchers were appointed to look at either ‘retaining the Crusaders name but changing the branding; or undertaking a complete rebranding, including the name and all imagery’. The Crusaders also spoke about the difference between bad Medieval Crusaders and good unifying Crusaders. Both statements mirrored exactly the November rebrand announcement seven months later; before research had started.

That same day, Crusaders CEO Colin Mansbridge excluded the Muslim community from consultation; ostensibly because ‘the tragedy was still raw’, but more truthfully because ‘he did not want the name change to be up to them’. Mansbridge was also ‘nervous about inciting the wrong behaviour’ from the Crusader community clearly because any Muslim involvement may have spurred a large scale anti-Muslim reaction thereby scuttling any name retention.

To be fair the Canterbury Muslim Association had declined to participate, obviously because of the scale of their grief, but also because they too would have been wary of a white backlash.

Photo supplied
Some from the broader Islamic community did comment. One advocate, Guled Mire, opposed any ‘insulting’ name ‘that marginalised Muslim or other religious or ethnic communities’. Another, Mustafa Farouk, thought the Crusaders could retain their name for the sake of unity. However, in an overall way the Muslim community was fundamentally excluded, March 15 lanced from the process by a white horse charging toward an inevitability.

In June, five months before the rebrand announcement, NZR Chair Brent Impey said the Crusaders would keep their name in 2020 because of commercial realities, ‘merchandising’ and ‘existing contracts’. More concerningly, he also said, ‘there has never been any intention that the Crusaders name would change in 2020’. The reality is that by choosing money over morality those words had etched the name in permanence well beyond 2020.

Veiled in Diversity and Māori Culture

Mansbridge, Crusaders Chair Grant Jarrold and NZR Head of Professional Rugby Chris Lundrem announced the rebrand. On a matter of national sensitivity, the board and executive of NZR, Māori Rugby, the Muslim community and mana whenua were conspicuous by their absence.

The rebrand translation of the whakataukī ‘mā pango, mā whero, ka oti te mahi’ ‘by black and red we can achieve’ does not properly elaborate the traditional meaning ‘we achieve by community (represented by black) and leaders (represented by red) working together’, because it is a shallow pre-purposed attempt at defending the indefensible.

In an exercise in window dressing, the rebrand also spoke to the diversity and inclusiveness of the playing squad. Indeed, 50% of the squad are of Māori and Polynesian descent, however, 90% of the 45-member governance, management and coaching group are Pākehā.

By all accounts there was input from one Māori designer on the logo, but from a mainstream rather than Māori-led design company. There also appears to have been some consultation with mana whenua but towards a predetermined rather than open outcome.

Photo supplied
Consequently, few understand how the new ‘Te Tohu’ logo represents ‘the natural landscape from the top of the Southern Alps to the depths of our moana’.

Reputable Māori artists and designers have described the logo as a koru with the ends cut off.

One Facebooker said, ‘Koru don’t use hard angles or straight lines. It's all curved lines. That’s an ure not a koru’. Others called it a ‘homage to frottage’, ‘semi-erect penises’ in passionate embrace.

Photo supplied
One on-liner wrote, ‘I'm no graphic designer, but I'd have thought the first rule in any design was to ask; does it look like a ginormous knob?’

The Medieval and Charlottesville Crusaders cloaked their racism in the Word of God. Our Crusaders are not the butchers of yore; however, their rebrand has achieved similar by obfuscating prejudice within an opaque korowai of Māori culture, a whakataukī they do not understand and a Māori logo no one comprehends.

Crusaders fans are passionate and loyal. The Crusaders and NZR have let them down. In doing so, they have ignored an occasion to honour the 51, stand against bigotry and expunge xenophobia from their support base. The legacy, history and culture of the most successful regional rugby team in the world would easily have survived any name change. Rarely in sport have so few white men so abundantly managed to under-deliver on a profoundly principled opportunity to proclaim tolerance and inclusivity. They have said ‘You are not us’. 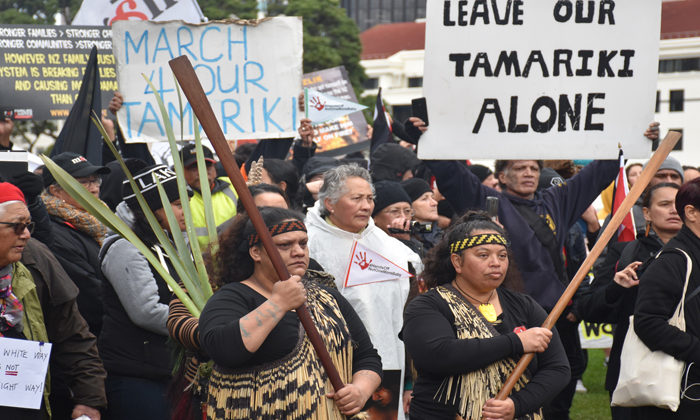 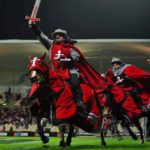