Labour leader David Shearer has finally made his mark.

Opinion: Earlier this week he did just about what everyone demanded of him and demoted his senior MP David Cunliffe from the front bench.

Mr Shearer was left with no choice after Mr Cunliffe's disgraceful performance at the Labour Party's annual meeting where he virtually announced his leadership intentions to the media.

His actions undermined the party's key policy announcement which was about Labour creating 100,000 new homes for first home buyers over the next 10 years.

This is the type of policy that will resonate with Labour's targeted voters.

Unfortunately only a few have been talking about it with the focus being on Mr Cunliffe's leadership aspirations.

His speech at the conference was the best he has given in his short time as leader. And his subsequent unanimous endorsement by his caucus for his leadership and efficient handling of Mr Cunliffe's nonsense has him arguably in his strongest position ever.

However, there still seems to be a lingering doubt over whether he will lead the party into the 2014 elections.

Despite his unanimous support, his leadership will be tested again in February.

Mr Trotter is a Cunliffe supporter and is in no doubt that he was set up at Labour's AGM.

He doesn't believe at all that Mr Cunliffe was contemplating a leadership challenge but got carried away with the moment and was out-manoeuvred by supporters of Mr Shearer and deputy leader Grant Robertson.

Mr Trotter believes that in February there will be a three-way leadership challenge with Mr Cunliffe putting his name up and Mr Robertson coming through the middle and taking the leadership.

Mr Trotter's view is interesting. Mr Robertson, although not well known to the wider public, is the powerhouse in the party. He's a very astute and capable politician who happens to be gay.

And while that shouldn't be a problem, the reality is that it will be for a section of Kiwis who are potential Labour voters.

Mr Robertson will know this because he is one of the savviest politicians in Parliament at the moment. So I think it's far from certain that he will challenge for the leadership, not in the immediate future anyway.

Mr Robertson has time on his side and although he is the leader of the Rainbow faction he knows being leader of the Labour Party is a totally different proposition and when he finally makes that challenge he will want to make sure that all his ducks are in place.

So Mr Shearer needs to capitalise on his strong performance at the conference and is now a real chance to lead Labour into the 2014 elections. 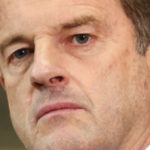 Labour leader David Shearer has finally made his mark.