An artists depiction of the Battle of Rangiriri.
Role Funding:

As the sun rose in the mists off the Waikato River this morning, Tohu Maumahara ki Rangiriri was unveiled where State Highway One crosses the place where Waikato-Tainui battled invading British forces 149 years ago.

The carving made from salvaged totara tells the story of the struggle between the Kingitanga and the Crown.

Project instigator Mokotauariki Kumar says when he heard New Zealand Transport needed to build a new road through the area in early 2013, he took the opportunity to ensure it was consistent with the cultural heritage of the area.

Mr Kumar says relations have improved markedly between the road builders and tangata whenua since the 1960s, when the Ministry of Works unearthed koiwi as it bulldozed through the Rangiriri battleground. 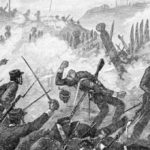